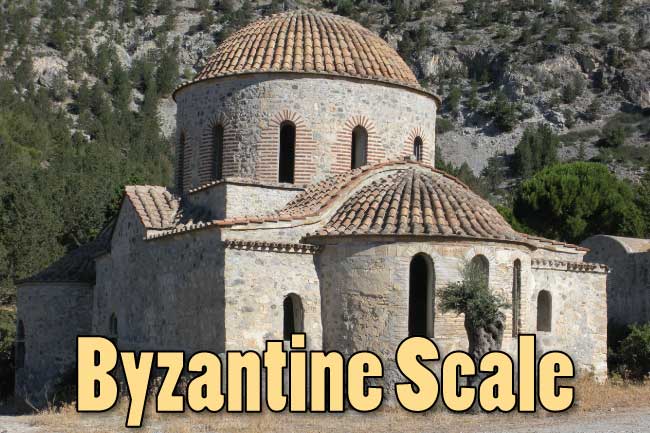 The Byzantine scale is the same as the Gypsy scale and the double harmonic scale. It is also related to the Phrygian dominant scale.

A quick look at Wikipedia tells me that the Byzantine Empire was ‘was the continuation of the Roman Empire in the East during Late Antiquity and the Middle Ages, when its capital city was Constantinople (modern-day Istanbul, which had been founded as Byzantium).’ It existed from 330 to 1453 AD.

So there you have it, a history lesson as well as a guitar lesson! This scale’s eastern roots are immediately apparent the moment you start playing with it. It sounds even more exotic than the similar Phrygian dominant scale.

The Byzantine scale doesn’t exactly fall under the fingers, so take a bit of time practicing it and finding a way of playing it that works for you.

It’s a great scale to use in order to spice up a standard rock guitar solo, and will really make your audience’s ears prick up!

If you want to become a fretboard wizard, download our printable Guitar Scales book to have all the patterns at your fingertips!