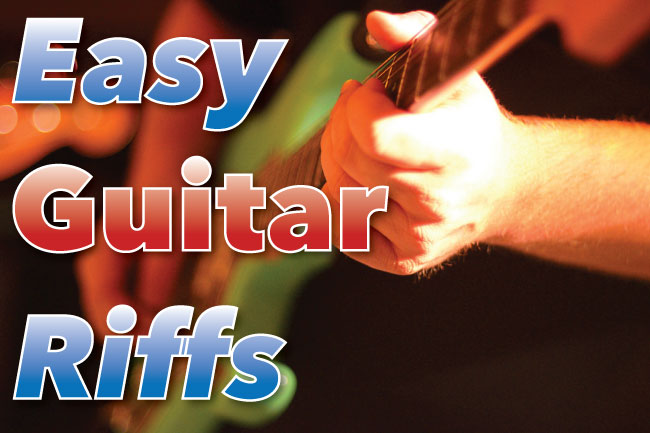 In the eighth and final part of Guitar Command’s ‘Learn Guitar In Two Months‘ series of lessons, we look at two techniques that you can use to create your own easy guitar riffs.

Power chords and arpeggios are both widely-used techniques that can be used to create guitar parts for songs.

In this lesson we’ve provide a basic introduction to each technique. This will allow you to experiment with power chords and arpeggios in your own music.

What Is A Riff?

If you intend to play guitar in a band you will be aware of the distinction between ‘lead’ and ‘rhythm’ guitar playing. (See the ‘Easy Guitar Solos‘ lesson for more info). Playing riffs comes somewhere in the middle.

Although you’re not improvising a traditional lead solo, you’re often playing the main part of the song at that point.

Riffs can also be played under vocal lines to support the melody, or at the beginning and end of a song to provide intros and outros.

Famous guitar riffs include the intro’s to ‘Smoke On The Water’ and ‘Day Tripper’. Riffs can be melodic, chordal or arpeggio based, or a mixture of all three. In this lesson we will show you how to create easy guitar riffs using power chords and arpeggios.

Power chords are very basic guitar chords. They are also known as ‘fifth’ chords, i.e. ‘G5’ or ‘E5’. One interesting aspect of power chords is that they are neither major nor minor in tonality. This makes them effective for creating riffs as they are more likely to fit with the harmony of a song.

Power chords are made up of two notes, one of which is usually repeated an octave higher. A C power chord is shown below, with the notes named.

Power chords are usually played on electric guitars with an overdriven or distorted sound. They are particularly common in rock and metal music, although they can be used in other genres too.

Below you’ll find a basic guitar riff using power chords. All you have to do to play the riff is slide the power chord into different positions on the guitar neck.

Once you have learned the power chord shapes–and can play the example riff above–try creating your own riffs.

Find out more about power chords.

Palm muting is a popular technique in rock and metal and is often used while playing power chords. Rhythm guitarists like Metallica’s James Hetfield produce complex rhythms using this method.

Palm muting involves playing a power chord while the palm (or, more precisely, the meaty part of the thumb) of the picking hand is pressing down on the strings. This produces a muted sound.

The palm can be pressed down and taken off at different points of the riff to create interesting rhythm patterns.

Arpeggios are also known as ‘broken chords’. This is because they are simply chords in which the notes are played separately rather than at the same time.

Below is a C chord and two C arpeggio patterns. You can see that the arpeggio uses exactly the same notes, but that they are played separately.

You can arpeggiate any guitar chord. You can either play straight up and down the chord, or invent your own arpeggio patterns. The music above shows a basic up and down pattern and a more varied pattern.

You can learn many arpeggio shapes in our downloadable Guitar Scales eBook.

The riff above is in 6/8 time. This means you count two groups of three, e.g. ‘One Two Three, Two Two Three’. Arpeggio riffs can sound very effective in songs when the beat is divided into threes like this.

There are many other techniques that you can use to write your own guitar riffs. Some involve playing lead guitar lines, others are based on chord playing.

Listen to your favorite guitar riffs and see if you can work out what the guitarist is doing. Ultimately your ears will be your best guides – in this and in all other aspects of music.

We hope that you have found this series of lessons useful. We have provided plenty of material for you to practice and play. Our aim was to inspire you to find out more about different aspects of guitar playing rather than to give you precise instructions every step of the way.

Let us know what you think of the lessons!

The best way to learn the guitar is to take lessons, either in a group or one-to-one. Why not get in touch with a local guitar teacher or music school and take your playing further?

Nowadays there are several companies offering online guitar tuition. Check out JamPlay Online Guitar Lessons if you are interested in learning this way.