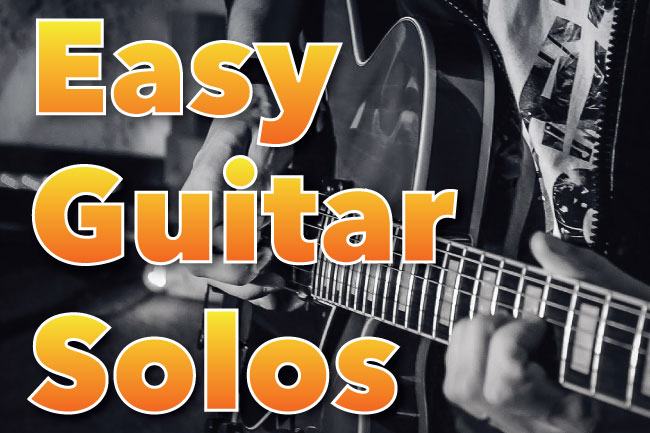 This lesson will show you how to play easy guitar solos. So far we’ve covered the basics of guitar playing, including simple chords and single note melody lines.

When you’re improvising a guitar solo you’re not playing music that’s been written out by someone else. It may sound easy, but (unless you’re playing avant-garde free jazz) there are still rules to follow.

When playing a guitar solo, you have to let your ears and musical knowledge guide you to the right notes.

Hopefully by following the lessons in our Learn To Play Guitar In Two Months series you’re getting to grips with the basics of guitar playing.

This lesson is going to introduce something slightly different. You’ve reached the point at where contemporary and classical guitar styles begin to branch away from each other.

If you want, you can scroll down the page and jump right in by playing along to the backing tracks provided.

In a nutshell, improvisation means playing music at the same time as it is being composed.

Although there has always been an element of improvisation in classical music, it’s more associated with ‘less formal’ musical styles.

Classical guitarists don’t often learn to improvise until later in their studies, if at all.

However, improvisation plays a major part in electric guitar playing. Being able to play guitar solos is one of the main aims of beginner guitar players.

In jazz, and in many forms of rock music, the guitar solo has become the focal point of the music. For example, improvisation is central to the music of both Steve Vai and Pat Metheny.

This lesson will show you how to play easy guitar solos. It will introduce improvisation on the guitar, and also includes backing tracks to allow you to try playing guitar solos yourself.

Using the notes of a scale, a guitarist can create the musical lines and melodies which form a guitar solo.

Which Scale To Use?

There are many different scales, each with their own sound. Choosing a scale that is not only in the right key, but which will also be suitable for using over a chord sequence requires knowledge of music theory and a good ear.

In order to play easy guitar solos, we’re going to introduce three different guitar scales. In actual fact, they’re quite closely related. You’ll notice that they share many of the same notes.

The scales below are in open position. This means that they are played within the first three frets and may also incorporate open strings.

You’ve already played a major scale in earlier lessons in this series. Major scales are the ‘standard’ scales from which most others are derived.

You can use the notes of a C major scale to play easy guitar solos over many chord progressions in C major. Over time, you will be able to let your ears guide you to select the best notes and phrases.

Below is a fretboard diagram showing all of the notes of a C major scale that are available in open position. This means that the one octave scale shown above is extended past the root notes in both directions. All of the additional notes are still in the C major scale, but in higher and lower octaves.

• The root notes, i.e. the Cs, are shown in green.
• The ‘o’s at the top of the diagram indicate that you can use the open strings, as they are part of the scale.

Try improvising a guitar solo over the C major chord progression below. Play along to the backing track:

You can play slowly or quickly. You can play up or down the scale or jump to notes that are not next to each other. Your phrases can be long or short – it’s up to you!

This scale is very similar to the C major scale. In fact, it uses exactly the same notes, it just starts from an A instead of a C.

The root notes (the As) are shown in green.

You can use A natural minor scale to play solos over chord progressions in A minor, such as the one below:

This scale uses five notes from the A natural minor scale, and omits all the rest. Using just these five notes, a pentatonic scale gives a more contemporary sound to guitar solos.

Notice that the open B string is not used in this scale:

Pentatonic minor scales are probably the most widely used scales in all guitar solos, in every style of music.

Try playing a guitar solo using the A pentatonic minor scale over the A minor chord progression above.

How To Play Easy Guitar Solos

There is a point at which playing the notes of guitar scale becomes playing a guitar solo. Even simply playing up and down the notes of a scale can start to sound musical if you vary the timing of the notes.

You can add interest to your solos by using techniques such as slides and vibrato. Slides are when you play a different note, then slide your finger onto the target note without picking the string again.

You can add color to the basic sound of a guitar note by adding vibrato. This means rocking your finger from side to side while holding a note down. The rate at which you do this is up to you – it can be fast or slow. You can also try moving the guitar string very slightly up and down while holding down a note. This can produce a more pronounced effect.

As you progress with the guitar you’ll find that there are many ways of creating additional interest in your solos. For example, you could begin to use other scales, or incorporate advanced playing techniques such as sweep picking or two-handed tapping.

However, with a musical approach you’ll get plenty of milage out of the three scales shown above.

If you are feeling confident, you could learn how to play these scales higher up the guitar neck.

This has been a very brief introduction to improvisation. However, even by just playing easy guitar solos over these chord progressions, you’ll have made a large stride forwards in your guitar playing.

The same chord progressions as those shown above could easily be used for advanced soloing. For many guitarists, playing guitar solos is the ultimate way of expressing themselves musically.