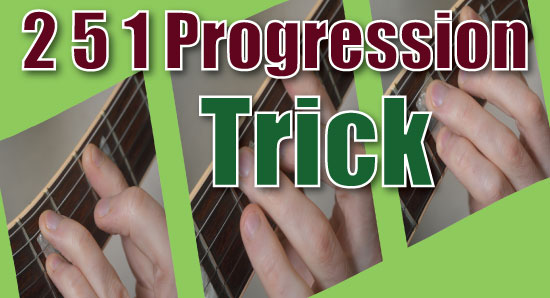 In this lesson I’m going to show you how to play 2 5 1 progressions using a nice little trick based around chord synonyms. Useful not only for jazz guitarists, but also for songwriters who want a nice way of introducing key changes.

Read on to find out more…

A chord synonym is when a chord has more than one name.

We’ve looked at a few chord synonyms on guitar in the last few lessons:

In this lesson I’m going to show you another chord synonym, and how it can be used to play a ii V I progression.

This lesson is mainly aimed at jazz guitarists. However, songwriters of any style will benefit from a little trick for changing key.

If you don’t know what a ii V I change is, you can find more information here.

Basically, the numbers 2 5 1 (often written in Roman numerals: ii V I) represent diatonic chords in a particular key. If you need to know what I mean by ‘diatonic chords’ check out this lesson.

For simplicity, in this lesson we’re going to look at 2 5 1 in C major.

Extended chords are explained in more detail in this lesson: Dominant Chords.

One way of playing a 2 5 1 progression on guitar using diatonic 7th chords is shown below:

Notice that in order to play the Dm7 chord, the top and bottom strings are omitted from the chord. You can either: dampen the strings with any of the other fretting fingers; avoid sounding them with your pick / fingers; or use a combination of the two.

The 2 5 1 progression itself is shown below.

Now, play the D minor 7th without omitting the top and bottom strings, as shown below:

The chord is still essentially a D minor 7th chord, but now it also contains the G notes from the top and bottom strings. In relation to the D root, the G note is the 11th.

This chord can also be called a G7sus4. Therefore, a D minor 11th chord played without the ninth note is synonymous with a G7sus4 chord.

Use This Information When Playing 2 5 1 Progressions

Here are the chords:

Here is the progression.

Using the information above, you can now play any major 2 5 1 progression by using a 7sus4 chord as the ii chord (instead of a minor 7th chord).

Some examples in different keys:

If you need to change key in a song, perhaps for a chorus, you could introduce the key change with a 2 5 1 in the new key. You could use the above technique to do this.

I admit, I’ve used a lot of words to describe quite a simple technique! However I think it’s important to fully understand the theory behind the sounds. Try using the 7sus4 trick when comping your favourite jazz standards.

I hope that you have enjoyed this lesson, and that you can use this technique in your own music. Please subscribe to Guitar Command for regular free guitar lessons.