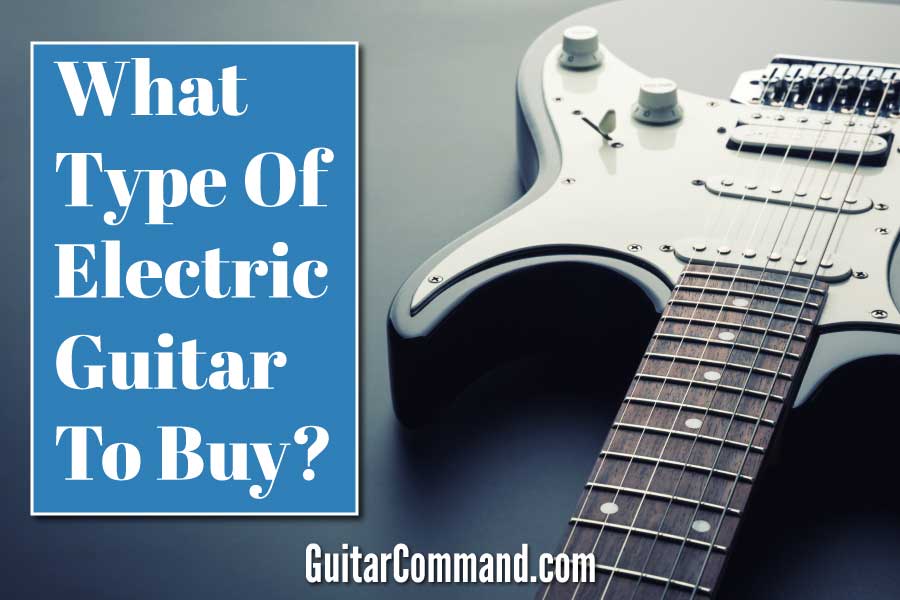 If you play hard rock or blues, then a Les Paul-style guitar will serve you equally as well. If jazz is your thing, then a semi-hollow / semi-acoustic electric guitar will probably be your instrument of choice.

What Type Of Electric Guitar Should I Buy?

Buying a new electric guitar is an exciting and important prospect! There are many great guitars on the market today for every type of budget.

On this page you’ll find information on some of the most popular types of electric guitar and the various factors that you should consider when buying an instrument.

How Much To Spend On An Electric Guitar?

For your first electric guitar, aim for a mid-priced model (c. $200-350 ish) made by a reputable manufacturer (Ibanez, Yamaha, Epiphone, etc.). If your budget won’t stretch that far, then consider looking at the second-hand market rather than getting a very cheap new guitar.

If you buy second-hand, then even if you subsequently decide that playing the electric guitar isn’t your thing, you can sell it for the same price you bought it for.

If you buy new, then you’ll be lucky to get 2/3 of what you paid for the guitar, even if it’s in pristine condition!

Things to Consider When Buying a New Electric Guitar

There are three main types of electric guitar:

As the names suggest, each of these types is distinguished by how its body is constructed.

One of the main advantages of solid-bodied guitars is that they’re less likely to produce feedback than semi-hollow or hollow guitars.

This means that you can play at higher volumes without having to take feedback-preventative measures such as using less distortion / gain or moving away from the amp.

Semi-hollow body guitars have a solid block of wood in the middle of an otherwise hollow body.

Semi-hollow guitars are used across a wide range of styles including jazz, blues, country, and indie-rock. However, it’s rare to see a semi-hollow guitar being used for metal / hard-rock.

The tone of semi-hollow guitars is typically “woodier” and “less-bright” than that of solid bodied guitars. This is in part due to the humbucking pickups (see further down the page) that are usually found on this type of guitar.

Fully-hollow guitars are often constructed, violin-style, with rounded tops and bottoms. Guitars such as these are known as “archtops”. The relatively complex and time-consuming way in which archtop guitars are manufactured means that prices are correspondingly high.

In general, unless you only play jazz, then these expensive, temperamental and rather fragile guitars are best avoided.

The style and arrangement of pickups is another important factor to consider when purchasing an electric guitar.

Most electric guitars come with more than one pickup. There is usually a switch somewhere on the guitar body to select which pickup is used.

There are two types of pickup: single coil and humbucker. Single coil pickups have one or more magnets wound with a single coil of wire. They generally have a bright, clear sound–great for funky rhythm guitar and clean (i.e. non-overdriven) rock and pop licks. When overdriven they retain much of their bright, precise character.

Humbucker pickups have two coils of wire. They produce a warmer, darker but slightly less clear sound than single-coil pickups. Humbuckers usually have a higher output, and are great for chunky, overdriven rhythm guitar sounds or thick, full-bodied solos. When used clean they produce a thick, warm tone that’s ideal for jazz.

One benefit of humbuckers is that they produce less hum, although this is usually only noticeable when the guitar is plugged in, but not being played.

The most common pickup arrangements are:

Best Wood For An Electric Guitar?

The type of wood used to build an electric guitar is a factor often neglected by potential guitar buyers. Although you shouldn’t let it influence your decision too much, the type of wood can be a major ingredient in shaping the tone and feel of a guitar.

Alder is known for its low-weight and relatively bright sound. Its grain lacks the beauty of mahogany or maple, and is often painted over. The bodies of most Fender electric guitars are made of alder.

Ash is generally a better-looking wood than alder, and is suitable for natural (unpainted) finishes. It has a bright-sound with lots of natural sustain. The bodies of many vintage Fender guitars (and some modern instruments) are constructed from ash.

Although basswood is often found in cheaper electric guitars don’t be too dismissive of this material; it’s also used by some higher-end manufacturers. Basswood has a solid, full sound, but is relatively light and can dent easily.

Mahogany is good-looking, durable, easy to work with, and resonant. It is heavier, and has a warmer, darker tone than alder. Many guitars have sides and back made from mahogany with another wood on top. This creates a balanced tonal blend with a rich, sturdy foundation.

Mahogany is the wood traditionally used for the bodies of Gibson guitars.

Maple is a brighter sounding wood than mahogany and the two are often combined for a balanced sound. Maple is known for the beauty of its grain, which is often left exposed in natural, non-painted finishes.

Best Wood For A Guitar Fretboard?

The three woods most commonly used for guitar fretboards are rosewood, maple and ebony. Recently, the use of pau ferro for guitar fingerboards has increased as it can be more sustainably produced than rosewood.

Rosewood has a dark color and a strong grain. It has a reassuring feel under the fingers and may help to give a guitar a warmer sound (although, in truth, the difference in sound between fingerboard woods is minimal).

Maple fingerboards can be recognized by their light color. They help produce a bright tone and have a slippery finish that helps make the neck feel fast and fluid.

Pau Ferro has emerged in recent years as a more sustainable alternative to rosewood for guitar fingerboards. Pau Ferro has similar durability to rosewood, but it is slightly brighter and snappier sounding.

The use of ebony for guitar fretboards is less common than with other types of wood. Ebony has a deep black color and helps produce a bright sound.

Which Type of Electric Guitar Fits Your Style?

Perhaps the most important factor in choosing which electric guitar to buy is how well a guitar will fit your style. If you play rock or pop, you might be better off with a solid or semi-hollow body guitar so you can handle louder volumes and effect pedals.

If you’re a traditional jazz guitarist, you’ll probably be better off with a fully-hollow archtop style guitar for a more conventional, straight-ahead jazz sound.

Some double-cutaway solid body guitars often come equipped with a string-through-body bridge which allows for enhanced tuning and sustain.

The Gibson Les Paul is probably the most famous and recognizable example of a single-cutaway, solid body guitar. This guitar design has been copied by hundreds of guitar manufacturers and is extremely popular among rock and blues guitarists.

The Les Paul generally features a mahogany body, occasionally with a maple top, and a mahogany neck generally with a rosewood fretboard. The guitar usually comes equipped with a pair of humbuckers that are controlled by a three-way toggle switch and two volume and tone knobs.

The three way-toggle switch allows you to select between the neck pickup, both pickups together, or the bridge pickup. The two volume and tone knobs correspond to each of the two pickups.

Single-cutaway, solid body guitars occasionally have a string-through-body design, but more often have a stop-bar tailpiece and bridge that sits freely on top of the guitar.

Examples of a double-cutaway, semi-hollow body design include the iconic Gibson ES-335, the Ibanez Artist and Artcore series, and D’Angelico DC Premier Series.

This style of electric guitar is prized for its versatility and rich sound and is used by players interested in covering a wide range of sonic territory.

Examples of single-cutaway, fully-hollow body guitars include the legendary Gibson L5 and ES-175, the Gretsch White Falcon, and the D’Angelico Premier EXL-1.

This design is favored by more traditional jazz guitarists for its huge, resonant sound and simple electronics.

Many of these guitars feature just one single coil or mini-humbucker pickup in the neck position. This places most of the tonal emphasis on the woods used.

Single-cutaway, fully-hollow body guitars are generally built with a floating bridge and stop bar tailpiece. Often these guitars have a longer scale length than other electric guitars, meaning that the neck is slightly longer than other guitars. This increases the width of the frets and can help increase the guitar’s clarity and resonance.

What Type Of Electric Guitar To Buy: Conclusion

Buying a new guitar is an exciting endeavor. It’s important to research the various styles of guitar on the market and examine their advantages and disadvantages.

Take stock of your style, goal, and budget and make sure you visit a few local guitar stores to try out all these different guitars in person!

1 thought on “What Type Of Electric Guitar To Buy? Guitar Buying Advice For Beginners”