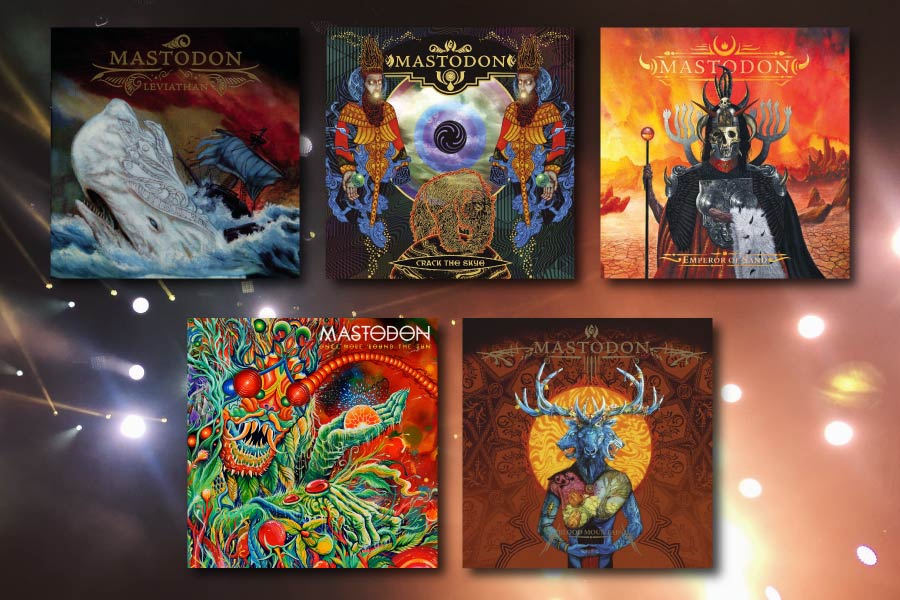 Mastodon are one of the biggest and most respected names in metal. Formed in Atlanta, Georgia in 2000, the four-piece specialize in brutal riffs and complex, multi-layered arrangements that give the band a sound all of their own.

Continue reading to find out more about the band, and to see Mastodon album reviews and suggestions.

A typical Mastodon song will feature complex, discordant arpeggiated riffs, death-metal “dirty” vocals, multiple sections that crash together to create an unbroken a wall of sound, and occasionally–from out of nowhere–an ear-worm of a chorus.

For a newcomer to the extreme metal genre a Mastodon album–particularly if it’s one of the band’s earlier works–can be a lot to take in. Persevere, however, and you’ll be rewarded with some of the most ground-breaking and influential metal of the last two decades.

Unusually for a metal band, Mastodon’s line-up has remained unchanged since the band’s formation in 2000 (although in the very early days they did have an additional lead singer).

The ace up Mastodon’s sleeve–or rather, the ace behind their drum kit, is Brann Dailor–a man also known as “The Octopus” due to his seemingly impossible rhythms and fills.

Bassist / vocalist Troy Sanders holds the whole shebang together, providing the foundation of the band’s sound but quite capable of keeping up with the guitarists’ extreme riffs when required.

Although Mastodon’s sound has changed over the years, the change has been gradual and most fans have stayed along for the ride, with only slight murmurings of discontent at the more polished sound of later offerings.

In general, the albums up to and including Blood Mountain are brutal, visceral affairs. The vocals tended to be dirty, with clean vocals only becoming more prevalent on Blood Mountain.

Crack the Skye heralded a change towards a slightly less heavy, more proggy sound, and subsequent albums have continued to dial down the rawness and as a result are more accessible to newcomers.

The generally-accepted consensus is that either Leviathan or Crack the Skye represent Mastodon at their peak (so far). With that It would be hard to disagree, but we’d also throw Once More ‘Round The Sun, Blood Mountain and Emperor of Sand into contention for the title of “Best Mastodon Album”.

We recommend you start out with either Leviathan or Blood Mountain together with either Emperor of Sand or Once More ‘Round The Sun. That way, you’ll get the best of the band’s early and later albums, and still have Crack the Skye to look forward to if you like what you hear!

Crack the Skye is regularly quoted by both fans and critics alike as Mastodon’s best album (although many would also award this title to Leviathan). While the album lacks the naked aggression of earlier releases, it introduces a new depth to the band’s sound. Powerful, mid-tempo and often complex arrangements dominate, with two tracks passing the 10-minute mark.

Click to view Crack the Skye price and reviews at Amazon

Leviathan, Mastodon’s second full album, is a concept album loosely based on Melville’s classic novel, Moby Dick. The album was awarded Best Album of the Year by no less than three magazines: Revolver, Kerrang! And Terrorizer.

As you might expect from to its subject matter, Leviathan is a powerful, brooding affair. There’s little respite from the complex riffing and ever-changing time signatures. Only the twisted minds (and fingers) of Hinds and Kelliher would have been capable of producing such mind-bending guitar lines (see also Blood Mountain).

Emperor of Sand is Mastodon’s latest album, and the band’s most accessible release to date. “Show Yourself”, the second track on the album, is the bands most commercial track by far, but doesn’t feel in any way forced. It’s only when “Word to the Wise” kicks in with its twisty 7/8 introduction are you reminded of Mastodon’s progressive roots. The second half of the album is more reminiscent of Mastodon’s early sound.

Emperor of Sand closes with the epic “Jaguar God”; a track which, from the beauty of its ballad-like introduction to the powerful riffs and themes of its central section, takes the listener on a journey through the whole gamut of Mastodon’s sound.

Once More ‘Round The Sun sees the band combine the brutality of their earliest albums, the proggy complexity of Crack the Skye, together with a new-found maturity. While not as raw as either Remission or Blood Mountain, the energy of those albums is still there, albeit in a slightly more controlled form. Several up-tempo tracks show a progression away from means that the album is less grungy than previous releases.

Blood Mountain contains some of the most intense riffs ever to grace a Mastodon album, which is saying something. This is no-holds-barred prog metal at its loudest and most intense. “Bladecatcher” sounds like Iron Maiden sped up and played backwards. It sort of works.

You probably won’t regret getting your hands on any of Mastodon’s albums. Whereas Crack the Skye and Leviathan are probably the albums most people would recommend, we’d also suggest you consider any of Emperor of Sand, Blood Mountain or Once More ‘Round the Sun.

Newcomers to the extreme metal genre should start with of Emperor of Sand, a brilliant album that, being more accessible than earlier works, would serve as a good introduction to the band’s more extreme output.

You can find out more about Mastodon on their official website.

Let us know your favorite Mastodon album or song in the comments section below!