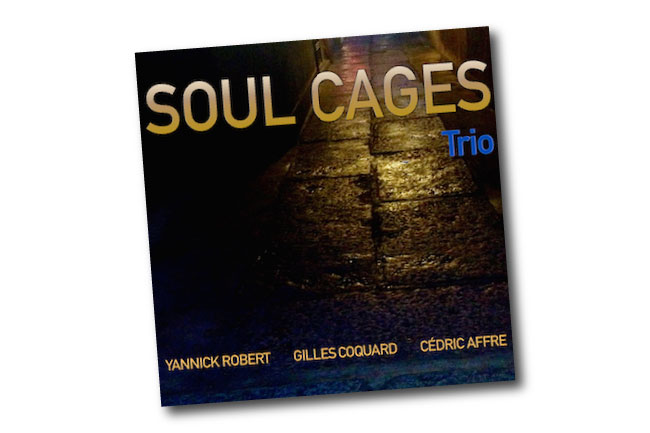 Yannick Robert is a French jazz guitarist who, after studying at California’s Guitar Institute of Technology (GIT) in the 80’s, has built up an impressive body of work playing in numerous collaborations and releasing a string of albums. Robert is an Ibanez endorsee, and in the 90’s the company introduced a fretless Yannick Robert signature model.

Robert’s prolific output includes his work with the Blues & Beyond Quartet, whose album ‘Echec et Malt’ we reviewed back in 2013. We very much enjoyed that album, and were excited to hear Robert’s latest recording.

Soul Cages Trio is the first release by Robert’s ensemble of the same name. Joining the guitarist on this recording are bassist Gilles Coquard and drummer Cédric Affre. As you might have guessed from the album’s title, Soul Cages Trio is a collection of re-worked Sting songs (with a couple of Police numbers thrown in for good measure).

Sting gets a lot of stick for his non-musical activities, but his songwriting prowess can’t be denied. We were interested to hear what the Soul Cages Trio had done with such strong source material.

All of the album’s ten tracks are instrumental, and the trio have clearly enjoyed putting their own mark on the songs; the arrangements are played with passion and flair. Overdubs have been kept to a minimum, giving the production a pleasingly spartan, live feel, with some nice interplay between the musicians. The songs are instantly recognisable, making this a very accessible album – even for jazz newbies.

The predominant style is laid-back jazz-fusion but, like the songs on which they are based, the tracks on Soul Cages Trio span a number of musical genres. As the album progresses you’ll hear traces of funk, blues, Latin, folk and rock.

The album’s opening track, ‘A Thousand Years’, sets the scene with a mellow jazz feel and minimal arrangement (which for a few moments towards the end metamorphoses into out-and-out rock). ‘Be Still My Beating Heart’ departs from the original, raising the tempo and imbuing it with a funk vibe. ‘Englishman in New York’ provides an up-tempo take on one of Sting’s best-known songs.

The album features songs taken from across Sting’s prodigious back catalogue. An atmospheric ‘Walking on the Moon’ is followed by ‘The Children’s Crusade’, which introduces a folky, melancholy mood, reminiscent of Charlie Haden & Pat Metheny’s album, ‘Beyond The Missouri Sky’.

The trio’s soulful arrangement of ‘Fields of Gold’ also brought Missouri Sky to mind, which is no bad thing. The album is brought to a close with ‘La Belle Dame Sans Regrets’, performed with a pleasingly Latin feel.

Robert has an unorthodox playing style, eschewing the use of a pick and instead playing with a classical fingerstyle technique. This allows him to incorporate some nice chordal playing in contrast to his impressive single-note line solos: a useful skill when playing in a trio setting. He uses a clean sound that is bright but not ‘biting’, and introduces subtle modulation effects at appropriate moments.

In a trio setting there’s plenty of space for everyone to make their mark, and all three members of the Soul Cages Trio turn in excellent performances. Robert’s solos are fluid and melodic. Coquard provides the groove together with some blistering funk licks and solos. Affre keeps it all together with some impressive drum work.

Soul Cages Trio is a treat not just for Sting fans, but also for lovers of well-played, expressive jazz fusion. If you’re visiting this site then you’re probably either a guitarist or a bassist, so if you’re looking for some inspiration for your own playing then this is one you should definitely check out.