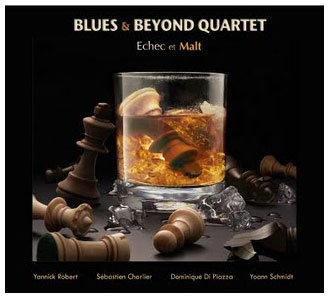 Echec Et Malt is the second album by France’s Blues And Beyond Quartet. Formed in 2010, the quartet comprises guitarist Yannick Robert, harmonica player Sébastien Charlier, drummer Yohann Schmidt and bassist Dominique Di Piazza. All four are well-respected in their fields and as you would expect the standard of musicianship on display is high.

Echec Et Malt contains nine nicely varied instrumental tracks, ranging from the quirky fusion of opener ‘Lune De Lievres’, to the exotic ‘Bengalore’. With blues as a starting point, the quartet move freely between funk, jazz and even folk. The more lyrical tracks, such as ‘Bengalore’, ‘Accordeon Tolbiac’ and ‘Pluie D’Hiver’, are particularly effective. Throughout the album, Charlier’s harmonica lines give the tracks a distinctively French feel.

Echec Et Malt was recorded at the prestigious Real World studios. Unsurprisingly this is a well produced album with a natural, live sound.

Robert (who is endorsed by Ibanez) coaxes a wide range of tones out of the electric guitar. His skillful playing is reminiscent of fusion greats such as Metheny and Holdsworth. Charlier takes blues harmonica to another level: at times he plays more like a bebop saxophonist. Di Piazza’s inventive bass lines and melodic fills, together with Schmidt’s exciting drumming, provide a fitting foundation to the tracks.

Echec Et Malt is an enjoyable record on many levels. The Blues And Beyond Quartet lives up to its name and fans of blues, fusion and jazz will all find something to enjoy here. Inspiring and tasteful jazz-blues with a twist.

In the video below, the Blues And Beyond Quartet play ‘Un chameau dans le désert’, from their previous album, ‘La Danse du Chat’.