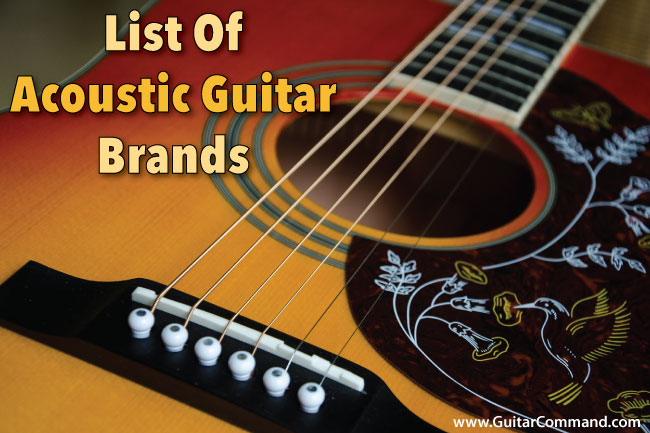 A list of acoustic guitar brands, with information about each company and the guitars they make. You’ll find out about guitars from Martin, Taylor, Yamaha, and a host of other smaller brands.

In this list we’ve included all of the major manufacturers of acoustic guitars, plus several promising smaller firms who are making a name for themselves in this particular niche.

We’ve also included any notable players associated with the brand, and an example of a guitar made by the brand that that is representative of their range.

A to Z List of Guitar Brands, With Example Models

Alvarez is based in St Louis, Missouri and was founded in 1965. The company had a long-term relationship with master luthier Kazuo Yairi, and their guitars are made in China and Japan.
Alvarez guitars specialize in acoustic, acoustic-electric and classical instruments.

Blueridge is a brand of Chinese-built guitars owned by manufacturer and distributor Saga Musical Instruments. Blueridge make a range of mid to high-range acoustic guitars with traditional styling.

Crafter guitars produce a wide range of acoustic guitars in their South Korean factory. The company was founded in 1972 by HyunKwon Park, who began trading as ‘Sungeum’ – a brand that is well-known in Korea.

D’Angelico Guitars are based in New York and produce acoustic, acoustic-electric and semi-acoustic guitars. Their instruments are manufactured in a variety of locations, South Korea, Indonesia, California and Michigan.

Dowina (pronounced ‘davina’) is an acoustic guitar brand based in Slovakia. All of their guitars are built by hand in their workshop in Devin, a town that lies on the junction of the rivers Danube and Morava.

Eastman began life in 1992 as Eastman Strings, an importer of violins from China. The company established its own workshops as it grew. Today Eastman are best known for their high-quality archtop and acoustic guitars.

Epiphone is an American musical instrument brand that is now owned by Gibson guitars. Epiphone was founded in 1873 in Turkey. Its Greek owner moved to the United States in 1903, bringing the company with him. Epiphone is currently based in Nashville, Tennessee.
Epiphone make a wide range of electric and acoustic guitars, many of which are ‘value’ versions of higher-priced Gibson models.

Faith Guitars was formed in 2002 by renowned British luthier Patrick James Eggle. They make a range of acoustic and acoustic-electric guitars in their Indonesian workshops. Eggle also produces a range of high-end electric guitars under his own name.

Gibson Brands, Inc. started life in 1902 as the ‘Gibson Mandolin-Guitar Mfg. Co., Ltd’. Today the company is one of the biggest names in guitar manufacturing.

Gibson makes a range of mainly high-end acoustic guitars, which includes models first made in the 1960’s.

As well as making electric and semi-acoustic guitars, Godin produce a range of innovative acoustic-electric guitars, in both steel-string and nylon varieties.

Previously owned by Fender, and now owned by the Californian Cordoba Music Group, Guild was originally formed in 1952 in New York.

The brand now makes a range of mid to high-end guitars in California.

Ibanez was one of the first Japanese brands to become widely known in the United States and Europe. Today the company makes a wide range of electric and acoustic guitars in all price ranges.

James Neligan are a guitar manufacturer who specialize in Chinese-made entry and mid-range acoustic guitars.

Larrivée is a Canadian acoustic guitar company that today makes its instruments in California. The company was founded in 1967 by luthier Jean Larrivée.

Larrivée produce a range of mid to high-end acoustic guitars.

No list of acoustic guitar brands would be complete without Martin. C.F. Martin & Company is one of the world’s best-known and well-respected makers of acoustic guitars. Founded in 1833 by Christian Frederick Martin, the company has produced a number of iconic acoustic guitars, including the D-45, D-35, D-28 and D-18.

Martin’s high-end models are made in the USA. The company also manufactures guitars in its Mexico factory.

Michael Kelly is a relatively new acoustic guitar brand, having been founded in 1999. The company imports high-quality guitars made to their own specifications from South Korea and other locations.

Mitchell produce a range of entry and mid-level guitars.

Ovation, or the Ovation Guitar Company, to give it its full name, is known for its characteristic round-backed guitars and original headstock design. Founded in New Hartford, Connecticut in 1965, Ovation was sold to Fender in 2008. The brand is now owned by Drum Workshop.

Ovation produces guitars in most price ranges, including entry-level instruments.

Paris Swing produce instruments based on the guitars made by French company Selmer between 1932 and 1952.

Aimed primarily at gypsy jazz guitarists hoping to recreate the tone of Django Reinhardt, these Chinese-made instruments are the closest many will get to the real thing.

Recording King make acoustic guitars, banjos, resonator and lap steel guitars and are based in California, importing guitars made to their own designs from abroad. Their good-looking traditional instruments are aimed at beginner and mid-range price points.

Santa Cruz Guitar Company was founded in 1976 by luthier Richard Hoover. They make high-quality hand-crafted guitars that are used by many big names in acoustic guitar playing.

Seagull is an acoustic guitar brand owned by Godin. The company aims to produce affordable guitars made to high-level specifications. Sustainability is also a focus of the company. Their mid-level range of guitars are available in a range of traditional designs.

Sigma is an acoustic guitar brand originally started by Martin in 1970 in response to inexpensive Japanese-made guitars appearing on the American market.

The brand was discontinued in 2011, but resurrected by a German company that now imports guitars made under the Sigma name from China.

Takamine is a Japanese manufacturer of acoustic guitars. Takamine was at the forefront of electro-acoustic guitar design, and pioneered the use of pre-amps and equalizers on their instruments.

The brand has always been well-thought of by acoustic guitarists, and produces guitars right across the price range spectrum.

Taylor’s high-end guitars are made in its California factory, while its lower-priced models are made in Tecate, Mexico.

Washburn Guitars was founded in 1883 in Chicago. It made guitars, mandolins, banjos and zithers until the 1940s.

The brand was resurrected in the 1960’s as an importer of quality instruments. Today Washburn is owned by JAM Industries USA, who own several other familiar brands, including Marshall Amplifiers and DigiTech Effects.

The Yamaha Corporation, as well as making a huge range of electric and acoustic instruments, also manufacture motorcycles, electronics and sports equipment.

Despite this wide variety of products, the Japanese multinational’s acoustic guitars have been consistently well-made. Over the years they’ve picked up a large number of fans.

Are you thinking about buying a new acoustic guitar? Wondering which brand to go for? It’s a big decision; you could be stuck with your new guitar for many years. You don’t want to pick the wrong one!

Brand loyalty is high among guitarists; we tend to get attached to our instruments – even to the point of overlooking their faults. Any criticism of the brand becomes a personal insult!

However, for this list we’ve remained professional and non-partisan!

We hope that you have enjoyed learning about the acoustic guitar brands listed above. Ultimately, whatever guitar you play, it’s up to you to put the work in and make the music.

While it would be nice to have a Martin D-18 and a Gibson Hummingbird sitting side by side in your practice room, a decent Yamaha will do the job of both guitars – leaving you some cash to spend on lessons, promotion, recording gear … and food!

10 thoughts on “List Of Acoustic Guitar Brands, Information & Players 2017. Find The Best Guitar For You!”