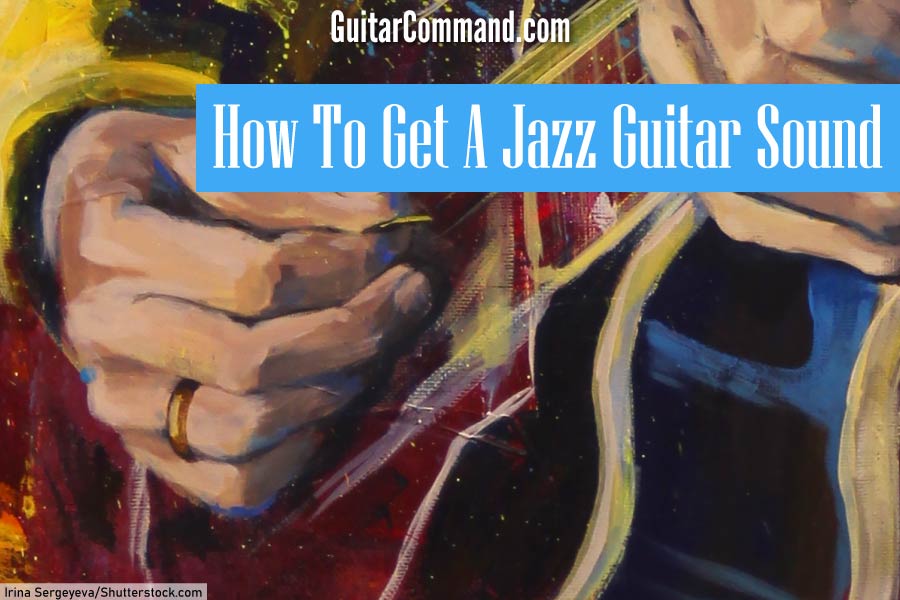 How To Get A Jazz Guitar Sound

Getting a good jazz guitar sound requires a combination of gear, playing technique and acquired knowledge. Jazz guitarists typically use archtop guitars, strung with heavy gauge, flatwound strings. They play using small, thick picks and rarely use anything other than the neck pickup, often with the tone turned down. The sound is amplified with powerful solid state amps, or valve amps with a clear, unnuanced sound. The use of effects is kept to a minimum, but reverb may be used in varying degrees.

While the above may describe how to get a traditional jazz guitar tone, there are many variations on this theme. On this page we take a look at the gear and techniques used by jazz guitarists, and how jazz guitar tone has evolved since the early days of jazz guitar…

A Brief History Of The Jazz Guitar Sound

Just what is a jazz guitar sound? A cursory look at the iconic jazz guitarists of the last century reveals there is not a single, definitive jazz guitar tone. Instead, jazz guitar sound has steadily evolved over the years, with a number of innovators having been responsible for keeping the instrument, and its sound, fresh and relevant.

If any guitarist could be said to have been responsible for the ‘classic’ jazz guitar sound, then it would be Charlie Christian.

Beginning in the early 1930’s, Christian pioneered the sound and role of the electric guitar in jazz music, influencing the creation of bebop and paving the way for future tone innovators.

Before Christian, the guitar was primarily an acoustic instrument, found nestled deep in the rhythm section and playing a mainly percussive role.

Christian’s clear, singing electric tone helped usher in a new style of guitar playing and redefined the role of the guitar in jazz.

Central to Christian’s sound was his choice of an archtop guitar fitted with a pickup. ‘Going electric’ enabled Christian to compete on a level footing with traditional jazz instruments.

Guitarists who followed in this tradition include Wes Montgomery, Grant Green, and George Benson, to name but a few.

Christian’s clean sound largely defined the jazz guitar sound until Jimi Hendrix arrived on the scene in the late 1960’s.

Hendrix used a solid-body stratocaster guitar, and his sound featured extensive and innovative use of effects such as fuzz, wah, and uni-vibe. Hendrix also employed progressive techniques such as the creative manipulation of feedback and experiments with the whammy bar.

Although not a jazz guitarist, Hendrix profoundly affected the direction of jazz guitar tone. After Hendrix, many influential musicians–including Miles Davis–sought guitarists who could bring a Hendrix-style sound and outlook to their ensembles.

The increasing popularity of modulation effects that began in the late 1970’s, and continued through the 1980’s, helped bridge a stylistic gap between the more Charlie Christian-influenced clean guitar aesthetic and the more Hendrix-inspired overdriven sound.

Guitarists such as Pat Metheny, John Scofield, and Mike Stern began to merge the rawness of the Hendrix rock sound with the clarity and classic sensibility of Christian’s cleaner sound, creating a hybrid style that incorporated chorus, flanger, phaser and other modulation effects. Reverb, and the occasional use of overdrive and distortion, were also used.

What gear do you need to get a good jazz guitar sound? The guitar itself, as well as the strings, pick, effects, and amplifier are all important factors in getting the sound you want…

Do I Need An Archtop / Hollow-Bodied Guitar For Jazz?

Naturally, the type of guitar being used has a huge influence on the end tone, and for the typical jazz guitar sound you need look no further than an archtop guitar. However, the use of this type of guitar isn’t always necessary, and as we’ll find, there are other options.

The classic, clean Charlie Christian-style guitar tone is best accomplished with a traditional archtop electric guitar. For most of his career, Christian played a Gibson ES-150, a fully hollow archtop guitar fitted with a P-90 style single box pickup.

Other players in this vein, including Wes Montgomery, favored the larger Gibson L-5 model. The Gibson L-5 is the ‘Cadillac’ of the guitar world. This large, fully hollow archtop guitar has a single cutaway and either one or two humbucking pickups depending on model.

(Legend has it that George Benson came to own Wes Montgomery’s favorite L-5 and then later sold it to Pat Metheny.)

One of the most common jazz guitars is the Gibson ES-175, a hollow-bodied archtop that usually features two humbucking pickups. Typically, only the neck pickup would be used.

Musicians such as these gravitated towards solid-body guitars, including both those with humbuckers such as the Gibson Les Paul and Ibanez’s 1970’s Lawsuit Guitars, and guitars such as the Stratocaster and Telecaster, which are equipped with single-coil pickups.

Semi-acoustic / semi-hollow guitars can give you the best of both worlds. They combine the thick, woody sound of an archtop with the tonal versatility of a solid-body. In addition, semi-hollow instruments are not as susceptible to feedback as fully-hollow guitars, making them a perfect option for higher volume styles incorporating overdrive and other effects.

Clean tone guitarists such as Grant Green and contemporary players like John Scofield and Kurt Rosenwinkel opt for the semi-hollow designs of the Gibson ES-335 and Ibanez Artist Series.

An important consideration in getting the perfect jazz guitar sound is the type of strings that are used.

Jazz guitarists traditionally use flat wound strings with a medium to heavy gauge, such as 0.12s or 0.13s.

Whereas the winding of round-wound strings gives them a ridged finish, that of flat wound strings produces a flat, slippery surface, which is ideal for fast lead lines and moving around the neck while comping.

String gauge refers to the thickness of the strings. Thicker strings produce a heavier sound, stay in tune better, and don’t bend as easily as lighter strings. Think ‘thunk’ rather than ‘twang’!

After the guitar and the strings, the choice of guitar pick is the next consideration in getting the perfect jazz guitar tone.

Jazz guitarists commonly use small, thick picks, which are known for their durability, dexterity, and tone. A thicker, smaller pick will produce a heavier, woodier tone and allows for more economical picking at faster tempos.

It is worth experimenting with the different options available. Dunlop produces Jazz I, II and III guitar picks. Fender 358 Teardrop heavy picks are also a classic choice.

Bear in mind, however, that perhaps the most famous jazz guitar tone of all time was produced by Wes Montgomery, using only his thumb!

The classic, clean jazz guitar sound is generally achieved without the use of effects.

However, the realities of modern music mean a jazz guitarist must be able to cover a large swath of sonic territory and a functional knowledge of certain guitar effects is immensely beneficial.

A volume pedal is extremely useful to balance soloing and accompaniment parts. Developing skill with a volume pedal also helps approximate the breathing inherent in brass and woodwind instruments.

Other effects such as chorus and delay can expand the tonal repertoire and are all but required for certain contemporary styles.

An overdrive or distortion pedal can be of great service, not only for raw and grungy sounds, but also for increasing sustain and resonance during more rock / fusion-influenced solos.

Best Amplifier For Getting A Jazz Guitar Sound

The final piece of the jazz guitar sound jigsaw puzzle is the amplifier.

Jazz guitarists of all stripes generally opt for a powerful, clean amplifier. It may seem sacrilegious to rock guitarists, but solid state amplifiers are often chosen over valve amps, and a ‘dirty’ channel, if available, will seldom be used.

Solid state amps used by jazz guitarists include the Roland Jazz Chorus JC 120 (an amp that could be said to be the ‘classic’ jazz guitar amp), and the Polytone Brute, a model used by George Benson, among others.

Regardless of which amplifier is chosen, the guitar’s tone control and pickup selection, together with the amp’s EQ and effects settings, will have a significant effect on the final sound of your guitar.

Typically, in jazz it is the neck pickup that is used, and the guitar’s tone control is often turned partially (or fully) down.

Jazz guitarists such as Grant Green employ a significant boost to their mid-range frequencies while using little or no reverb, while others, such as Pat Metheny, roll back the higher-end frequencies and wash their guitar tone through heavy reverb.

How To Get A Jazz Guitar Sound: Conclusion

Find the players you resonate with, listen to their recordings extensively, identify what makes them great, and learn everything you possibly can about what and how they are playing. Learning, transcribing and analysing their solos is incredibly beneficial.

Engaging in this sort of in-depth, hands-on study will do far more for your jazz guitar tone than spending a fortune on a Gibson L-5 ever will.

Jazz Guitar Albums You Need To Own

The Best Guitars For Playing Jazz