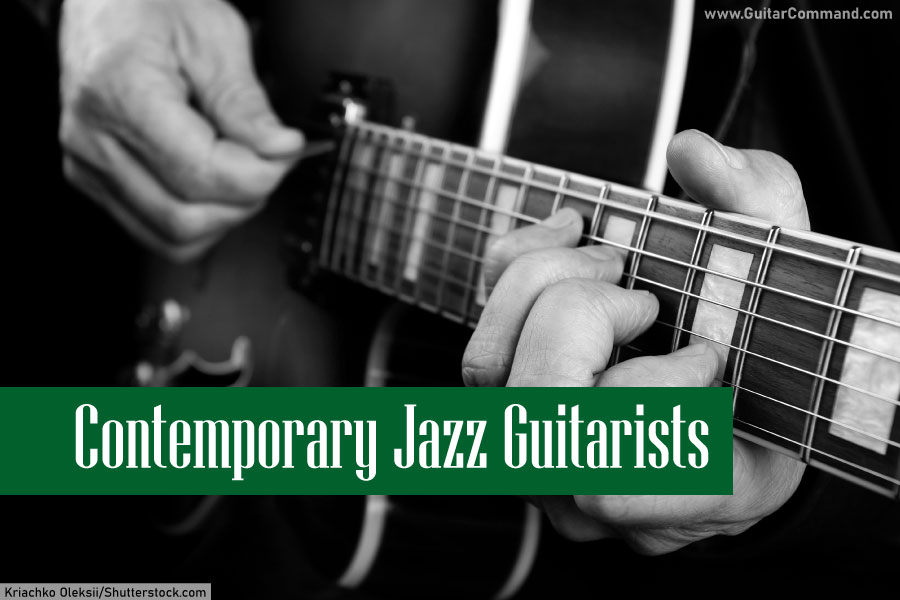 If you’ve listened to your favorite jazz guitar albums so many times that you can sing each solo note-perfect in your head and hear the first notes of the next song before it’s even started, then check out this guide to the new generation of jazz guitarists and their work…

Pat Metheny burst onto the music scene in 1976 with his debut album Bright Size Life. This recording, which featured Jaco Pastorius on bass and Bob Moses on drums, introduced the world to Metheny’s unique fusion of folk music, Americana, bebop and post-bop vocabulary. His work over the subsequent decades has influenced a generation of jazz guitarists.

A list (in no particular order) of contemporary jazz guitarists, with information on their careers to date, and examples of their playing…

Jazz guitarist Kurt Rosenwinkel has himself become something of an iconic figure in the two decades following the release of his debut album East Coast Love Affair, which came out in 1999 on the Fresh Sound label.

Rosenwinkel attended the Berklee College of Music in the early 1990’s, but left in his third year to tour with vibraphonist Gary Burton.

The American guitarist’s style blends bebop, electronica, hip-hop, and rock into a fresh, dynamic sound. He often employs a lapel microphone to record the sound of his voice while he plays, mixing it with the sound of his guitar in addition to a host of other effects.

Rosenwinkel’s latest release, Angels Around, is a classic guitar-bass-drums trio featuring a mix of originals and less-often-played jazz classics.

Gilad Hekselman is an Isreali guitarist who moved to New York to study at the New School for Jazz and Contemporary Music. He released his debut album Splitlife in 2006.

Hekselman went on to win the 2005 Montreux Jazz Festival Guitar Competition in Switzerland. Since then, he has performed with many major contemporary jazz musicians including pianist Aaron Parks, saxophonist Ben Wendell, drummer Ari Hoenig, and guitarists John Scofield and Peter Bernstein.

Hekselman’s style features a strong legato technique and excellent time feel combined with a unique approach to chords and voice leading. This has helped him produce some of the most inspired, original guitar playing of the last two decades.

Here is the studio recording of Gilad’s tune “Tokyo Cookie” from his 2018 release Ask For Chaos:

Julian Lage made his first appearance in the documentary Jules at Eight, which featured him as a child prodigy.

Originally from the San Francisco Bay Area, Lage has been an active performer, composer, and music instructor for over two decades. He is regarded as one of the world’s most fluid and interesting improvising guitarists, despite his being just a shade over 30 years old.

Lage’s debut album Sounding Point was released in 2009 on the EmArcy label, and was nominated at the 2010 Grammy Awards for Best Contemporary Jazz Album.

Here is the title cut from Lage’s most recent release Love Hurts:

Mansur Brown is a London-based contemporary jazz guitarist who has garnered attention for his playing with the London fusion groups Yussef Kamaal, Triforce, and Alfa Mist.

His playing blends elements of jazz, rock, and electronica with break-beats and drum and bass rhythms into a cohesive and exciting style.

Brown’s debut album Shiroi and his follow up EP Tesuto have helped to raise the profile of this extremely talented young guitarist.

Here is a live version of Brown’s tune “Mashita” from the album Shiroi:

Another representative from the new London music scene is the guitarist and vocalist Tom Misch.

Misch released his debut album Geography in 2018 and followed it up with 2020’s collaboration with drummer Yussef Dayes, What Kinda Music.

Misch’s style draws on jazz, RnB, funk, and soul styles and blends them into a sharp, precise, and tasteful sound.

Here is a live version of his song “Lift Off” from What Kinda Music:

Originally from Port Townsend, Washington, Miles Okazaki is a guitarist and composer with his own fascinating style. An incredibly adept guitarist, Okazaki has formulated a complex and intricate rhythmic and melodic system for improvising on the guitar.

He has worked as a sideman with a wide range of musicians including Dan Weiss, Kenny Barron, John Zorn, and Matt Mitchell.

Here is a live recording of Okazaki’s band performing his tune “Kudzu”, from the album Trickster, at the Jazz Gallery in New York:

Liberty Ellman has defined himself as one of the most interesting guitarists of the last twenty years. His melodic style and clear, piercing tone and individual sense of composition have helped to establish an excellent and unique sound amongst contemporary jazz guitarists.

Named the No. 1 Rising Star Guitarist in DownBeat magazine’s annual Critics’ Poll in 2016, Ellman performed guitar, mixed, and produced Henry Threadgill’s Pulitzer Prize winning album In for a Penny, in for a Pound in 2015.

Mary Halvorson has emerged as one of the most formidable and original sounds in contemporary jazz guitar.

Originally a biology student at Wesleyan University, Halvorson switched majors to music after sitting in on a class of the iconic saxophonist and composer Anthony Braxton, a professor at the time.

Since then, Halvorson has released 9 albums as a leader and countless more as a collaborator. In 2019 she was awarded a MacArthur Fellowship “genius” grant for her work along with the award for Best Guitar in DownBeat magazine’s international Critics’ Poll from 2017 to 2019.

Originally from Benin, Africa, guitarist and vocalist Lionel Loueke has a traced a path across the world, from the Ivory Coast, to Paris, to the Berklee College of  Music in Boston and finally to the Thelonious Monk Institute at UCLA where he was mentored by established masters Herbie Hancock, Wayne Shorter, and Terrance Blanchard.

Loueke’s style blends elements of African guitar and vocal styles with jazz and funk to create a unique and rich sonic palette. In the last decade, he has established himself as one of the most creative and in-demand guitarists of his generation, performing and recording with his mentors Hancock, Short, and Blanchard as well as contemporary luminaries like Robert Glasper, Esperanza Spalding, Kendrick Scott and Avishai Cohen.

Here is the tune “Molika” from his trio project, Gilfema:

A graduate of Houston’s famous High School for the Performing and Visual Arts, guitarist and composer Mike Moreno moved to New York City to study at the New School for Jazz and has since developed into a singular force in the realms of modern jazz guitar.

His style is both melodic and virtuosic and he has a deep understanding of the history of music.

Moreno has released six albums as a leader, including his latest Three for Three in 2017 on the Criss Cross label. He has performed and toured extensively with many contemporary musicians including Terrance Blanchard, Nicholas Payton, Robert Glasper, and Kendrick Scott and currently teaches at Temple University in Philadelphia, Pennsylvania.

The ten young jazz guitarists listed above are carrying on the jazz guitar tradition while at the same time pushing the boundaries of the guitar in jazz and other fields of music.

Check them out, study their playing and technique, and be sure to see them live when you are able to!