This lesson will show you how to incorporate linked diatonic arpeggios into your lead guitar solos. It’s aimed mainly at jazz guitarists, but can be used in most rock and pop styles too. 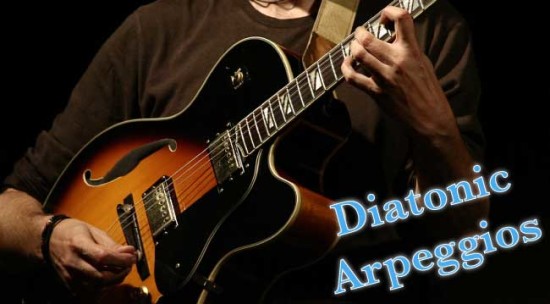 First I’ll introduce the (very simple) theory behind the technique. Then I’ll provide some arpeggio shapes that you can use when you try the technique out for yourself.

At the end of the article I’ve included a few short licks to illustrate the technique.

To get started, try playing the following line. It’s not particularly musical: it’s simply all seven diatonic 7ths in the key of C. Use it to warm up and to get an idea of the sound of linked arpeggios.

The line above covers all of the diatonic 7th arpeggios in C major. you can either use alternate picking, or sweep / economy picking (basically, not changing direction of your picking when hopping over strings).

Firstly, if you’re unaware of what ‘diatonic’ means, I recommend that you check this article out. It explains what is meant by ‘diatonic’, and lists the chords in each key.

Basically, while improvising using this technique, you’re not going to be thinking in terms of scales.

Neither are you going to be thinking about using arpeggiated versions of the chord you’re playing over.

What you are going to be doing is constructing lines using arpeggiated forms of chords that are diatonic to the key.

If you’re soloing over a D minor 7th chord in the key of C, for example, using this technique you wouldn’t necessarily use a D minor 7th arpeggio. Instead, you could use the arpeggiated version of any of the chords diatonic to the key of C major (see the list below).

By linking adjacent diatonic arpeggios and moving up and down the fretboard you can create long, flowing lines. They often ‘depart’ from the chord sequence and lead to some original-sounds.

In C major, you could use using arpeggiated versions of the following chords:

The three arpeggio types (Major 7th, Minor 7th and Minor 7th Flat 5) can be played using the shapes in the diagrams below.

You can construct licks using the following shapes. The root notes are marked in blue.

See how the above arpeggio shapes are used to play the ‘Diatonic Arpeggios Tab’ example at the top of the page.

The following licks can all be used over a 2 5 1 progression. They are rather simplistic, but serve to illustrate the technique of leaving the chords behind and joining up diatonic arpeggios to create lines.

This is a great technique for getting out of the ‘scales’ rut. If you feel that your playing is too ‘scale-based’, then throw in some arpeggios to break things up.

I personally like the sound of ‘deserting the chord sequence’ and going off on wild diatonic arpeggio-based runs. Because all of the notes are diatonic, you’ll never play a ‘truly’ wrong note – unless the music changes key!

The key to this technique is practicing the diatonic arpeggios in sequence up and down the neck. Start in C, and play C maj7, D min7, Em7, Fmaj7, etc. arpeggios (or arpeggio-based licks) up and down the fretboard, changing fretboard position for every arpeggio.

A lot of words for a relatively simple technique, I admit. I hope it’s all clear, and that you find a way of using linked arpeggio lines in your soloing. If you have any questions, please feel free to ask in the comments below.

Have free guitar news delivered direct to your inbox. Get our ‘Guitar Chords Of The Week’, plus lessons, reviews and more: click here to subscribe to Guitar Command. (We never spam, we never pass on any information, and you can unsubscribe instantly, at any time.)