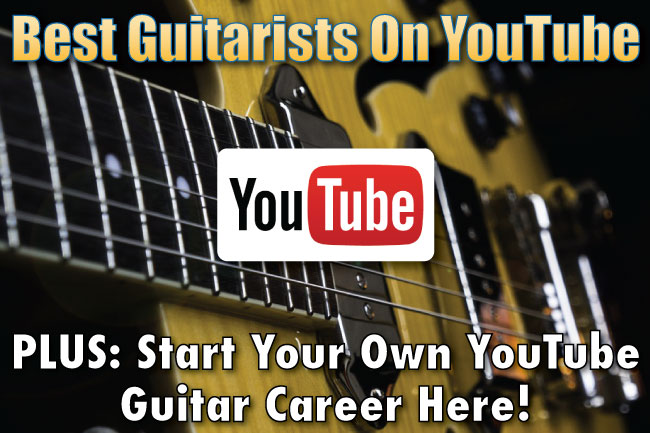 Watch the best guitarists YouTube has to offer – and learn how to start your own YouTube channel.

If you want to hear great guitar playing — for free, whenever you want — then YouTube is the place to go.

Yes, there are many other places that guitarists hang out online, but if you want want to listen to, and learn from, great guitarists, then YouTube is king.

It’s also the best place to get your own music out there, and in front of other players and fans.

In this article, we look at some of the best guitarists on YouTube. We’ll also provide tips on how you can start your own YouTube guitar career…

***2018 EDIT: This article has been up for a long time and a lot has happened since it was written. If you have any suggestions for other awesome YouTube guitarists – in any genre – please let us know in the comments below: we’d really appreciate it!***

The increase in popularity of YouTube over the last 10 years has made a significant difference to how we listen to music and how musicians connect to their audiences. Guitarists have been able to find new audiences irrespective of their playing style.

In fact, guitarists with very specific styles of playing often find it easier to gain attention. ‘Niche’ styles can cut through the large numbers of ‘general’ guitar videos.

The result is that many unknown guitar players have gained international recognition, and even those with ‘non-mainstream’ styles have been able to carve out financially-rewarding careers.

Audiences have also gained by being introduced to new techniques and styles of playing, and other guitar players have been inspired to play and create something similar. Sounds like a win-win for everyone!

This article provides examples of guitar players who have become popular with YouTube. We look at their playing styles and look at how they have gained their popularity.

We aren’t really suggesting that the following are ‘the best YouTube guitar players’: there are many other awesome guitarists on YouTube: we just haven’t got the space to include them. However, if you check out just a few of the players on this list, you’ll be able to see what’s possible.

If your favourite YouTube guitar player isn’t mentioned here, LET US KNOW in the comments below! The whole point of articles like this is to share the awesomeness!

Due to the versatile solo nature of the instrument, a new wave of finger-style players are taking modern pop tunes — and adding a finger-style twist.

One notable example is Sungha Jung, a young guitarist who started posting his guitar videos when he was 9 years old. Now aged 18, with over 3 million subscribers, he specialises in finger-style arrangements of classic pop songs.

In addition, Jung also composes his own beautiful guitar arrangements. Technically, there is a strong classical element in his playing: he uses melodic patterns over chordal harmonies using the classic PIMA pattern picking (P = Pulgar (Thumb), I = Indice (Index), M = Medio (Middle), A = Annular (Ring Finger)). He also incorporates folk percussive techniques, slapping back on the strings on the 2nd and 4th beat of the song.

Here are two videos, his most popular and one that he has recently created. This shows the development of this playing, and illustrates how careers really can start on YouTube.

Pirates of the Caribbean:

Another great YouTube acoustic guitar player is Ewan Dobson. He uses the addition of both thumb and finger picks within his playing which gives a sharper tone to his playing. He also adds a mix of delay effect in some of this own compositions which gives the instrument almost an electric guitar feel.

The videos themselves range from a simple blank background to heavily stylised graphics. Dobson also favors wearing Chinese conical or coolie hats and bandanas during his performance :). Here are a couple of his YouTube videos to give you a feel of this playing:

Many rock and metal players have taken popular songs covers and adding a rock twist. One example is Cole Rollard. His channel covers pop artists songs from the likes of Michael Jackson and Carly Rae Jepsen. In addition he posts a number of guitar battles and musical collaborations with other guitarists and musicians.

Cole Rollard’s playing also appears to be influenced by neo-classical guitarists such as Yngwie Malmsteen, evident in his videos covering Lindsey Stirling’s song ‘Crystalline’. Here are a couple of his YouTube videos to give you a feel of this playing.

Through the Fire and Flames

Eric Calderone is another rock guitarist who covers film tunes and pop classics. His playing, compared to that of Cole Rollard, is less embellished, generally following the main melody of the song while being interspersed with flourishes of speed picking and the occasional solo.

One of the key features of his channel is that he has kept a ‘home spun’ style in his videos, rather than opting for the lavish, TV-style, productions that many guitarists and musicians are going for. This gives his site a personal feel while still showing his fantastic technique. 1 million subscribers obviously feel the same way!

Here is his most popular video is Let it Go from the film Frozen:

Although many session guitarists are well-known within session circles, YouTube has given such players a platform to show their playing versatility and how playing to someone else’s specific song direction can be successfully accomplished.

Tim Pierce’s recent YouTube channel is a great example of this. Tim Pierce is known for recording some great guitar parts for artists such as Michael Jackson and Jason Mraz.

Predominantly an electric guitarist, Pierce shows his ability to play in most styles, including: rock, blues and country; however, he is also comfortable playing acoustic guitar. His videos take the form of live recording sessions, session and playing tutorials and the occasional product demonstration.

One of the most interesting and useful part of his YouTube channel is how he layers recorded guitars on top of each other for a ‘live’ recording session which compliment and enhance rather than dominate the song.

Pierce’s videos show how to create light and simple guitar accompaniment parts that take up different frequency spaces, which, when added together, create an effective arrangement.

In fact, he mentions that the Jason Mraz song ‘I’m Yours’ had many layered acoustic guitar parts, although it sounds just like one guitar part. Here are a couple of his YouTube videos to give you a feel for his channel:

Matt’s channel similar to that of Tim Pierce has a mix of video content including jazz playing and improvising, collaborative performances with other musicians, jazz guitar lessons and some product demonstrations. Matt’s playing sticks very much to the traditional jazz standard and his focus in most videos is on creative improvisation. Like many of the other guitarists he can also be found on other YouTube sites promoting particular guitar and amplifier equipment.

Achim’s channel is a little more focused on playing in general with fewer lesson videos. However, he does provide a link to purchase the TAB arrangement of all the pieces performed to help the student guitarist. As well as Jazz he also covers Blues playing with a mix of ‘soloing’ videos ranging from Texas Blues through to Rhythm and Blues. Here are the two most popular videos of each player to give you a feel of their playing style.

So, judging from the above, there has never been a better time to launch yourself as a guitarist on YouTube. By analysing the most successful YouTube guitar channels, you can identify what makes them stand out. Here are some things to keep in mind for those who want to start creating and sharing their videos.

Tips on How To Start A Successful YouTube Music Channel

• Focus on one genre / style of playing that you love. Be authentic.

• Cover popular songs and respond to suggestions from fans / subscribers.

• Try covering songs that are very different to the style of your instrument; e.g. if you’re a rock player then find a really commercial pop or dance track; if you’e a finger-style player arrange a classical rock track.

• Create and add your own compositions.

• Collaborate with other guitarists and musicians on your site.

• Create either home-spun or TV-polished video that suits your desired image (and your budget).

• Use keywords on your YouTube video to attract audiences, also create a separate linked social media site to drive audiences onto your YouTube site. There is a wealth of information about social media for musicians to help you get started. Usually most artists use Twitter and Facebook in conjunction with You Tube. Look at the DIY musician website to get you started.

Although you play and create videos because it’s what you love to do, once you’re up and running there are many ways to monitize your offerings. Here is a list of possible earners:

(Please note that you can only do the following, if it is your own song or you have paid for a a license to use, record, make an arrangement of a cover song.)

• Sell the transcription of your arrangement

• Endorse and be sponsored by aligned products

So there you have it: some inspirational sites to show you that it is possible, and some great tips on how it can be done. If you’re a 21st century musician, there really is no excuse for not getting on YouTube and doing what you love!