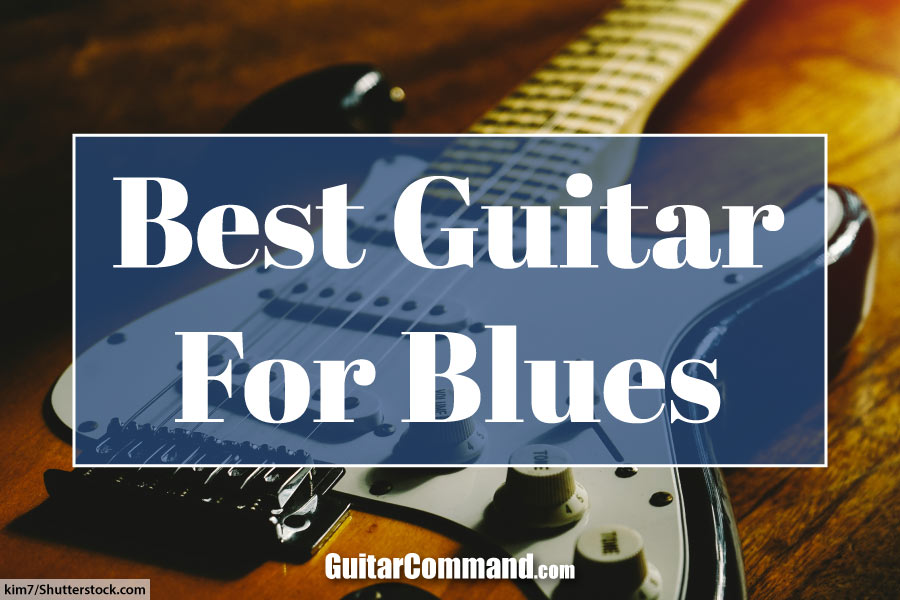 What is the best guitar for blues? On this page, we explore what makes a good blues guitar, and suggest suitable instruments for all pockets…

It wouldn’t be an exaggeration to say that blues has had a strong influence on many modern rock genres. Most guitarists know their way around the blues, even if it’s not their primary style.

While it’s true that you can play blues on just about any electric (or acoustic) guitar, if blues is a style you’re looking to specialize in, then you should aim to get the right guitar for the job.

If you want the TL;DR version, below are three guitars you should make it a priority to try out. Otherwise, continue reading to find out what makes a good blues guitar. (There are more recommendations further down the page.)

Many blues guitarists start out using one of the more common Squier models, namely the Stratocaster or Telecaster.

Either of these guitars would be an excellent beginner blues guitar, but we think the Stratocaster, with its tremolo and three pickup configuration, is marginally the better blues guitar.

See the Squier Stratocaster at Amazon

Our top pick for an intermediate player is another Fender classic. The warm, clear, articulate sound of a Fender Stratocaster – preferably played through a tube amp at the edge of distortion – is the guitar sound many players associate with the blues.

That’s with good reason. Rory Gallagher, Stevie Ray Vaughan, Buddy Guy, Eric Clapton, Jeff Beck, and a host of other legendary blues and blues-inspired players all wielded the Stratocaster at one point or another.

Fender’s Mexican-made Player Stratocaster is one of the best blues guitars for players of an intermediate (and above) standard.

See the Player Stratocaster at Amazon 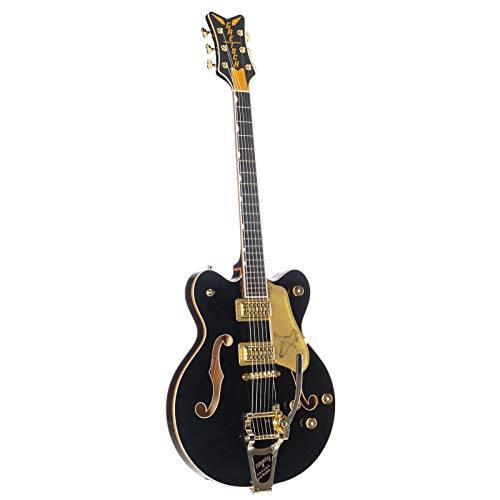 If you’re serious about the blues and want the very best blues guitar, then you’ll probably be looking at a US-made Stratocaster, a Gibson ES-335, or equivalent.

But if you want to stand out from the crowd, how about trying something a little different?

Gretsch might enjoy a reputation as the go-to guitar builder for those seeking country twang, but their Black Falcon, a beautiful, semi-hollow humbucker-equipped guitar, would be a leftfield choice for pro blues guitarists looking to expand their tonal arsenal.

This guitar is luxuriously appointed, with its black-and-gold finish, maple neck with ebony fretboard, and Bigsby tremolo. The Bigsby vibrato arm will give your notes and chords all the warm, warbling vinyl-era tone you could want. With two Filter’Tron humbucking pickups and string-through-body construction, this guitar has plenty of sustain and bite in its tone.

Unlike many fully hollow guitars, the Gretsch Black Falcon has a solid block of maple running through its body, reducing the risk of feedback for players looking to adopt a muscular, blues-rock tone. The slimmer body and reduced weight of this guitar, compared to its elder brother, the acoustic-sized White Falcon, makes it ideal for a gigging or touring guitarist who does most of their playing standing up.

A great pro guitar for a professional price, and it’s probably the coolest-looking guitar on any given stage.

What Makes a Good Blues Guitar?

You’ll need to consider quality of wood, electronics, and hardware. The guitar’s pickups, its tremolo system (if any), tuning stability, and how it looks are all important factors worth considering before you make a purchase.

Generally speaking, most people think of electric guitar playing when they think of the blues.

Blues legend Muddy Waters might have started playing on a length of wire nailed to a piece of wood, and Robert Johnson played acoustics exclusively, but modern listeners typically think of electric guitar as being a vital component of blues music.

Ultra-traditional blues purists might prefer you to play using the neck of a beer bottle and a battered old pre-war acoustic guitar, but modern players need the versatility of an electric.

There are two major factors that will set guitar appropriate for the blues apart from those better suited to other genres. The first of these is tone. Most blues players don’t use a lot of distortion. Accordingly, your guitar’s pickups don’t need to have ultra-high output. In fact, lower-output pickups are perfect for blues playing.

That’s because of the second consideration: feel. Stylistically, the blues is more about conveying emotion and telling a story than laser-precise technique.

A blues player is expected to slide, bend, and double-stop their way through a performance, not to blaze away up and down the fretboard. Dynamic control, expression, and articulation are major weapons in any blues player’s arsenal.

Pickups with lower output won’t distort or compress – thereby limiting your expressive ability – as easily as white-hot pickups will, and are therefore perfectly suited to blues playing.

It’s always worth mentioning that audience members listen with their eyes as much as their ears. Blues players typically avoid guitars with pointy shapes (with the notable exception of blues legend Albert King and his Flying V), locking tremolo systems, or garish color schemes. Simple, understated elegance is the look that most blues guitarists go for, leaving the attention-seeking guitars to the shredders.

With these criteria in mind, most blues players go for classic mid-century American guitars from Gibson or Fender, or guitars modelled on these iconic instruments.

Solid-bodied electrics are the most versatile instruments tone-wise, but a semi-hollow guitar with a center block (for reducing feedback) and humbuckers can produce a thick, smooth sound ideal for jazz-tinged blues or throaty, B.B. King lines.

For many blues guitarists, the search for the best blues guitar begins and ends with a Strat. Whether it’s a Squier, an intermediate, Mexican-made Player series Strat, or a US-made American Professional II or Ultra, you know you’ll be getting a guitar perfect for blues – and pretty much whatever else you throw at it.

The Vintera Strat gets the nod here for two reasons. First of all, its competitive price of around $1000 is great value. Secondly, the vintage specs on the guitar in terms of hardware and electronics make it perfect for nailing those elusive 1960s blues tones.

Even the six-point Fender tremolo is correct to the 1960s era that saw Fender fuel the British blues boom.

A comfortable C-shaped neck and chiming, clear-as-day re-voiced pickups make this guitar a great guitar for an intermediate or above blues guitarist.

See the Vintera Stratocaster at Amazon

If you’re more rooted in the Gibson camp, then you’re probably dreaming about (or lucky enough to own) an ES-335. These semi-hollow, thick-toned beauties are probably the “blusiest” of all of Gibson’s traditional guitars.

The Starcaster is an often-forgotten Fender hollow-bodied electric guitar. Its twin humbuckers and semi-hollow body are reminiscent of the other American guitar giant–Gibson–and their top-of-the-line ES series. The bolt-on maple neck and six-a-side headstock, however, are pure Fender. The resulting mix is an astonishingly versatile, comfortable guitar perfect for a variety of genres.

These two humbucking pickups will produce a surprising array of tones, from throaty Telecaster twang to sweet BB King-esque neck-pickup sparkle. The comfortable C-shaped neck profile also has a satin finish that becomes smoother and easier to play the more you play it. A great beginner guitar for someone looking to practise regularly and get to grips with the blues.

The Epiphone Casino is probably best known as a “Beatles” guitar, but the snarl and crackle of the twin P90 pickups in this fully hollow instrument are perfect for blues players.

The Epiphone Casino is a fully hollow guitar, so we’d advise players to avoid running it through an array of distortion pedals or into a saturated amplifier. If, however, John Mayer-esque ede-of-breakup tones and snarling, articulate lead lines are your thing, this might be the guitar for you.

The Epiphone Casino really sounds best when played through an old-school tube amplifier. This guitar is best known for its phenomenal tonal balance of depth and clarity. If you love it when your more elaborate chords ring clear and true, this guitar is a great choice.

Big, open chords and jazzy extensions alike respond very well to this guitar. Anyone looking to add a bit of feedback-fuelled fuzz to their tonal arsenal – a la Gary Clark Jr – would also enjoy the screaming lead tone on offer with this hollow guitar. 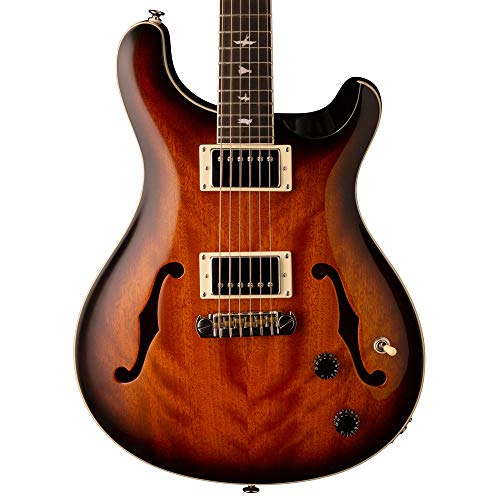 This guitar is designed from the ground up to be resonant and warm. PRS aimed to provide the power and stability of a Les Paul with the warmth and resonance of a classic hollowbody. In this respect, they’ve succeeded, as you’ll actually feel full-bodied open chords resonating within the guitar where it sits against your body.

With plenty of tonal clarity and the shred-ready playability you’d expect from PRS, this is a great guitar at a very affordable price. 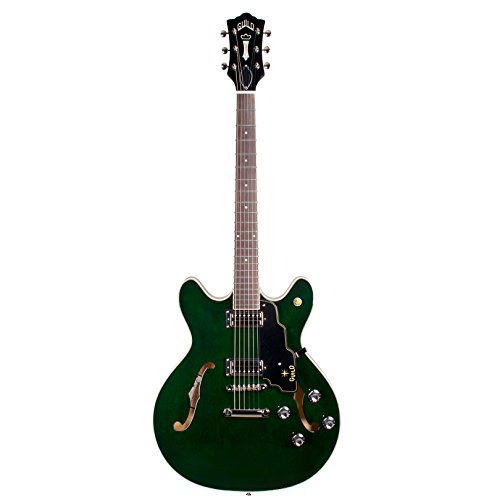 Yet another guitar taking its design cues from the Gibson 335, the Guild Starfire is a no-nonsense tone machine.

With a center block to minimize feedback, an ebony fretboard, and heritage most brands would kill for – it was Buddy Guy’s guitar of choice in the early days of Chicago blues – the star of the show here is the Starfire’s “Little Bucker” LB1 pickups.

The Little Buckers are brighter than standard PAF-style humbuckers, but with more warmth and bite than typical single-coils. Like many of the best guitars on this list, it offers a nice middle ground and plenty of tonal versatility to a modern gigging guitarist. 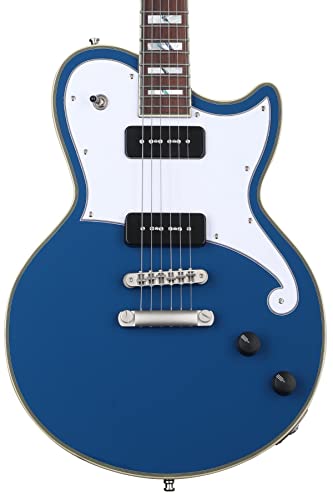 Drawing clear design cues from the Les Paul and the Telecaster, this singlecut guitar from New York-based builders D’Angelico offers a rare thing in the 21st century: a fresh twist on an old classic.

Its basswood body and maple neck give this guitar tremendous tonal versatility, as do its pair of Seymour Duncan humbucking pickups. These pickups are coil-tapped, so you can dial in nice, fat humbucker tones as well as single-coil sparkle. The guitar’s lightweight construction, ultra-modern specs and comfortable contours make it a great choice for playing lengthy jams on stage.

Still looking for a guitar? Check out these pages: