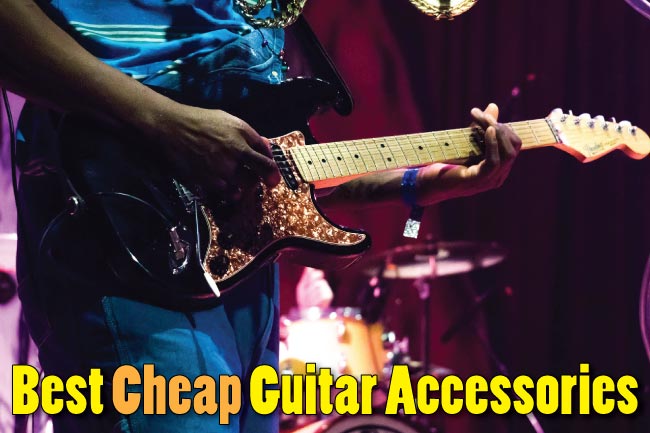 Feel like treating yourself to some new guitar gear? On this page we take a look at a selection of the best cheap guitar accessories in 2017, most of which are under $30.

So, you’ve got a bit of extra cash burning a hole in your pocket. What do you do?

a) Order a slap-up pizza meal for you and your friends, or

b) Invest in some useful guitar gear that will last longer than twenty minutes of greasy happiness.

It’s a no-brainer:  buy yourself some cool new guitar gear!

Others, such as the Risqué Guitar Picks at #13, won’t really do much at all.

Who doesn’t need more space in their practice room or studio? We love having lots of guitars around but they do tend to get in the way when they’re not being used.

However, if you store your guitar in a case then playing it becomes less spontaneous. Sure, it only takes a couple seconds to get it out, but there’s a psychological barrier to not having a guitar within arm’s reach and ready to play.

With a guitar hanger, all of your problems are solved. Well, not all of them. Just the ‘I haven’t got anywhere to hang my guitar’ problem.

The guitar hanger above has got a nice hardwood base, and masses of good reviews on Amazon. Check it out …

I think that having a guitar stand is almost as important as owning a hard case for your guitar. (Please don’t tell me that you use a gig bag!!!)

Seeing a guitar left leaning against a wall actually makes me feel uneasy. You know, like watching a small child playing at a cliff edge uneasy. Well, not quite that uneasy. But uneasy.

I’ve owned several guitar stands in my time. I’ve had heavy-duty multiple instrument ones, and flimsy, single guitar ones.

Over time, I’ve come to prefer the collapsible lightweight ones. Like the one above. You can just collapse them and put them under a desk when not in use. They won’t take up permanent floor space.

They will get knocked over easily though, so keep small children out of your practice room (and away from cliff edges).

If you want the best, get a Manhasset like the one above, or a similar, sturdily-built model.

Whatever you do, don’t get one of those awful collapsible ones that falls over when you sneeze and becomes Rubiks cube-like in complexity whenever you want to fold it up.

A quick wipe after a long, sweaty session will keep your most treasured possession in tip-top condition.

The same goes for your guitar.

Some people clean their strings religiously every time they’ve finished playing. That may be overkill. However, if you care about the tone and longevity of your strings, a quick rub down after heavy use feels like it’s doing some good.

I haven’t tried it, but the stuff above seems to get good reviews on Amazon.

Alternately, go the whole hog and get a guitar care kit, with fret oil, polish and lint-free towels. Your axe will be the talk of the town.

Incidentally, I’ve heard that some people put old bass guitar strings in boiling water in order to restore lost tone. Does this work? I’ve got a feeling whoever told me that was pulling my leg. Let me know in the comments!

I never used to ‘get’ capos. I just couldn’t see the point of them; if I wanted to play in a different key then I could just play barre chords in a different position.

Since entering the world of acoustic playing, however, the point of capos becomes clear.

They make a guitar easier to play. Sure, they also transpose the music, but as a fingerstyle acoustic guitarist I jump on anything that makes the darn thing easier to play.

Of course, joking aside, capos are awesome for playing in different keys and preserving the clarity of ‘open’ string chords.

A must for acoustic guitarists. The Dunlop 83CB looks good, and is made from ‘aircraft quality aluminium’. I’m sure that’s somehow important.

Some people would say that I’d rather play naked than do a lot of things, because I enjoy playing naked. However that’s simply not true. I tried it once; it wasn’t for me. Or the audience. Or the police.

Get a locking strap and make your gigging more enjoyable.

When I was just starting out I used to think that guitar leads were disposable. I must’ve spent hundreds replacing broken crappy leads before realizing that one decent lead will last longer than ten (or more) cheap ones.

In addition, there’s nothing worse than having a lead give out on you while you’re playing a gig.

For example, bumping into your father-in-law at a swingers club is merely awkward. Having intermittent sound throughout a gig is the stuff of nightmares. And there’s no blackmail potential.

The bad boy above should make your gigging less stressful. Over time, it will probably pay for itself. Alternatively, get a Monster Cable, which is probably the best on the market. But it’s not cheap.

Playing fast seems to be the Holy Grail for many guitarists. However, the only way you’ll be able to play fast is lots of boring, repetitive, monotonous practice. The best thing to ensure your practice sessions are boring, repetitive and monotonous? A metronome!

It’ll make you concentrate on your technique, and it won’t let you noodle away for hour upon hour fantasizing about being a rock star. It’s a harsh mistress, but like all good mistresses, it will make the suffering worthwhile.

Joking aside, a metronome is a jolly handy bit of kit, and one of the best cheap guitar accessories there is.

After buying and trying literally hundreds of metronomes a quick look at some Amazon reviews, the Kilq MetroPitch shown above seems pretty good, and it’s also a tuner.

9. Power Supply For Your Pedals

A power supply is probably one of the most boring guitar accessories money can buy. But if it saves you having to run around a strange city trying to find batteries ten minutes before a gig then buy it you must. You can treat yourself to something fancy once you’ve got a solid gigging rig.

The last thing you want to be worrying about before a gig is freaking batteries.

The Donner Dp-1 Guitar Pedal Power Supply is a bit over $30, but it looks decent and you probably don’t want to scrimp with this kind of thing.

Yes, you could cut the end off of a bottle – that would be so, like, old school, right? – but unless you’ve got the perfect bottle and a good glass-cutting technique then save yourself some time, effort and a couple pints of blood and buy a factory-made slide for a few bucks.

Can a book be termed a ‘guitar accessory’? No? Ah well, I’ll include it anyway.

Whether you’re: a perfectionist who doesn’t believe that anyone could set up a guitar just the way you like it; a cheapskate; or both (i.e. me), then learning about guitar maintenance is a good idea.

It’s also immensely satisfying to fix something yourself rather than paying someone who knows what they’re doing someone else to do it for you.

In addition, learning how to set guitars up could lead to a whole new income stream.

I believe that risqué guitar picks are essential accessories for any pro guitarist.

Fight the system; show your friends that for you, P.C. still stands for ‘personal computer’.

Best Guitar Accessories For Under $30 – Conclusion

I hope you’ve enjoyed this quick round up of cheap guitar accessories.

There’s more to a good guitar rig than a guitar and an amp. Some of the gear in the above list isn’t particularly glamorous, but it may make your life as a guitarist easier.

Is your wallet $30 lighter now? Why not get a pizza anyway? nom nom nom. 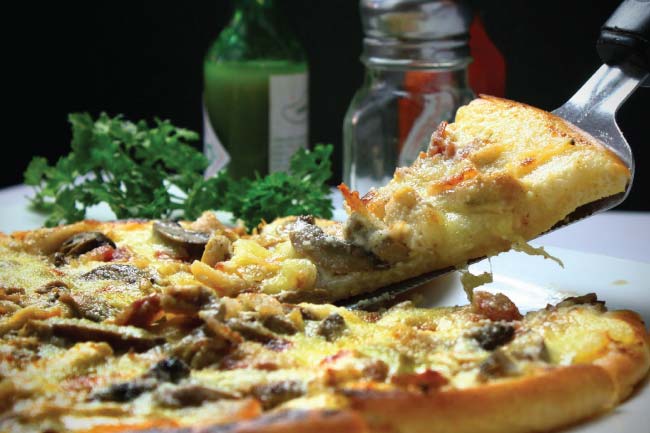