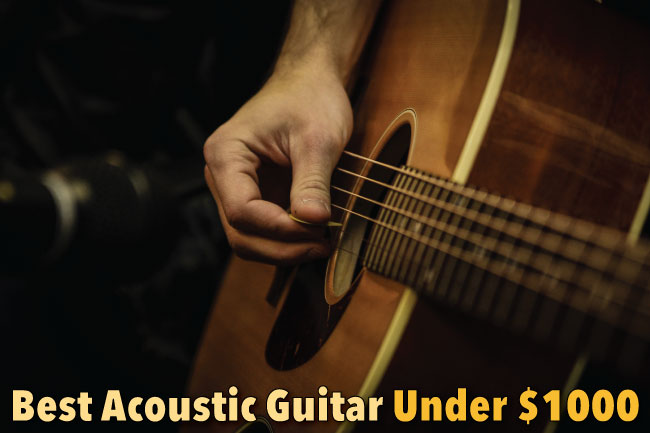 On this page, we attempt to find the best acoustic guitar under 1000 dollars available in early 2017.

In this roundup, we’ve included both acoustic-electric guitars and instruments that are purely acoustic. In fact, several of these models are available either with or without electronics. If you only play acoustic, and have no need of a ‘fancy’ electric system, then you can often save yourself some cash by getting a non-electric version.

Many of these guitars are also available in a range of different woods and with varying finish and hardware specifications. This gives rise to a bewildering array of model numbers, acronyms, prefixes and suffixes. Throughout the guide we’ll be offering some pointers as to what they all mean!

The $750 to $1000 price point is where the first ‘serious’ guitars by the best-known acoustic brands begin to appear. You’ll be able to pick up a ‘lifetime’ guitar that will last you your entire playing career – and perhaps that of your (favorite) child, too!

If you’re in the market for a decent acoustic guitar under a grand, then you could do a lot worse than check out any of the ‘top ten’ acoustic guitars listed below.

Here are the contenders for the title of ‘best acoustic guitar under 1000 in 2017’, in no particular order:

You can’t go far wrong with a Taylor 200 series guitar. Taylor are the number one manufacturer of acoustic guitars in the USA, and with good reason. Their products consistently attract good reviews from both the guitar press and the paying, playing public.

The 214ce Deluxe features a solid Sitka spruce top and layered rosewood back and sides. (Non-deluxe versions feature layered koa sides; whether this makes a huge difference to the sound is up for debate, but we’d rather have rosewood!)

The 214cs DLX is fitted with Taylor Expression System® 2 electronics.

Definitely one to put on your ‘must try’ list!

Another nice Taylor acoustic guitar under $1000 is the popular 210. One for the purists, it has a traditional dreadnought shape, and the non-‘e’ model is purely acoustic.

The DLX ‘deluxe’ model features a solid spruce top and layered rosewood back and sides.

We’d suggest that if you can stretch to it, the DLX models, which have a slightly higher spec and come with a fitted case, are worth the additional outlay.

Another Taylor acoustic guitar that you may want to consider is the 114. Slightly cheaper than its 200 series stablemates, the 114 has layered sapele back and sides, and its sides and neck are varnished.

Like most Taylor acoustic guitars, the 114 is available with and without Expression System® 2 (ES2) electronics. The ES2 piezo pickup adds versatility at the price of having the extra worry of needing a 9v battery.

The Seagull Artist Mosaic acoustic guitar has a solid cedar top and solid mahogany back and sides. The guitar has a semi-gloss finish.

Instruments with cedar tops traditionally have a warmer sound than those with spruce tops, and the Artist Mosaic is said to have a ‘sweet, warm’ tone.

We’re not huge fans of the Seagull’s small headstock, but that’s purely personal; you might love it! If you do, this mid-price Canadian is definitely worth a closer look!

Although $1,000 may seem like a lot, when you’re talking acoustic guitars the numbers can get a lot bigger! C. F. Martin & Company (or simply ‘Martin’ to, well, nearly everyone) are one of the most well-respected acoustic guitar brands in the world.

Guitars such as the Martin D-28 and D-45 have taken their place in the acoustic guitar hall of fame among best and most iconic acoustic instruments ever made.

Sought-after Martin guitars can fetch tens – even hundreds – of thousands of dollars on the second-hand market.

The unquestioned quality of Martin’s acoustic guitars comes at a price that puts them out of the price range of many musicians.

However, it is possible to acquire a Martin for under a grand. However, there are a few minus points to a guitar such as the GPCPA5. It’s made in Mexico, the materials used are cheaper, and the quality of the finish is perhaps not as high as guitars higher up the Martin range.

By the way, the GP stands for ‘Grand Performance’, which itself refers to the body shape of the guitar. The ‘C’ stands for ‘cutaway’, ‘PA’ for ‘Performing Artist’ and the ‘5’ for the spec level (the highest of which is ‘1’).

The top is unbound, which looks either ‘contemporary’ or ‘cheap’, depending on your personal taste.

The Martin GPCPA5 has a solid Sitka spruce top, and high pressure laminated rosewood back and sides. It is equipped with a Fishman pickup and Sonitone preamp system with controls for volume and tone.

The GPGA5, and dreadnaught stablemate the DCPA5, attracted good-to-lukewarm reviews from the press. However, we’ve found very few customer reviews that have anything bad to say about these ‘inexpensive’ Martins.

Update: the 5 series doesn’t seem to appear on the manufacturer’s website, and may have been discontinued. There may be deals available on this guitar!

The Blueridge BR-140A is a Martin D-18-inspired guitar with a mid-range price tag. It has a solid spruce top, solid mahogany sides and back and a high-gloss finish.

With a traditional look, and made from high-quality materials (the ‘A’ stands for Adirondack spruce), the BR-140A is well worth checking out, and deserves its place among the best acoustic guitars for under 1000 dollars.

The Breedlove Solo Concert is a modern-looking acoustic guitar. It was designed with the fingerstyle acoustic guitarist in mind, being compact and easy to play.

The Solo Concert has a solid cedar top and rosewood body. A particular feature of the Breedlove Solo series is a ‘side monitor sound hole‘. This is basically a hole–with a removable plug–in the upper side of the instrument.

The side hole is designed to allow the player to better hear the guitar: positive reviews of the Solo Concert would suggest that this is more than just a gimmick.

I’ve been a longtime fan of Yamaha acoustic guitars, having owned an LL-11 for many years. I’ve happily used this guitar for fingerstyle, flatpicking and rhythm playing. Throughout this time I’ve neither had any need nor inclination to get another acoustic guitar.

Although the brand doesn’t have the kudos of the Martins and Taylors of this world, this often works in the buyer’s favor. You’re not ‘paying for the name’; you’re paying for a good, workmanlike guitar that will serve you well for year after year.

Although at first glance the Yamaha LL16 appears to be a traditional acoustic guitar, it is fitted with a very discreet pickup system. There are no ugly on-board controls to spoil the Yamaha’s rather fetching appearance; you just plug in and let the amp / sound engineer do all the work. Sounds good to me.

There’s also no battery, which is always a good thing.

The LL16M has a solid Engelmann Spruce top treated with a process known as A.R.E., or ‘Acoustic Resonance Enhancement’. This is an ‘original wood reforming technology’ developed by Yamaha, which involves manipulating the molecular properties of the wood.

Sounds like witchcraft to me, but it seems to work: reviews of the LL16 series are overwhelmingly positive.

The Guild D-140 is a dreadnought guitar in a vintage sunburst finish. The top is solid Sitka spruce and the sides are solid African mahogany. The finish is all gloss.

If the antique sunburst is not to your taste, then there’s a natural finish version available too.

The A6 get consistently good online reviews, so the hybrid approach seems to work. Perhaps you should break with tradition and make your next guitar a Godin?

We suggest that you use this page as a starting point for further research into finding the sub-$1000 guitar of your dreams. If you like the look of a guitar, you may well be able to get it in your preferred wood and finish.

In order to compile this list we looked at various online reviews, bestseller charts, and manufacturer specs, as well as drawing on our own experience in what makes a good acoustic guitar.

We hope that this round up has allowed you to focus on a particular model. If you’re buying online, check that the guitars come well set up. It’s also a good idea to check that the company accepts returns if the instrument doesn’t live up to your expectations.

Otherwise, it’s time to the guitar showroom. Have you got your best acoustic licks at the ready?