Is guitar technology catching up with the rest of the gear in a modern studio? Have guitarists never had it so good, or are manufacturers trying to fix something that isn’t broken? Guitar Command takes a look at some of the innovations available to today’s guitarist… 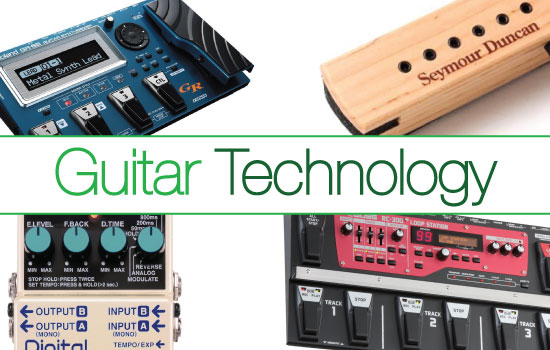 With the popularity of the guitar at an all time high, it is no wonder that companies are coming up with new inventions aimed at guitarists. While some of these are no more than gimmicks, others are genuinely helpful and can raise the creative potential of the instrument. Below are some of the most important developments in guitar technology.

Once the bane of a stringed instrument player’s life, tuning is now quick and easy thanks to electronic tuners. Although tuners have been around for some time, they are now smaller and cheaper than ever. A short time ago we reviewed the Fender FT-004, which tunes using the vibrations of the guitar rather than with a microphone. The price for this useful little gadget is under $10.

Perhaps guitarists of the future won’t even need tuners? Modern guitars, such as the Line6 Variax models, can tune the instrument using electronics. Gibson’s Min-ETune system, now fitted on several of the company’s guitars, tunes the strings physically, rather than by using software. It has to be seen to be believed:

However impressive guitar technology may be, there remains the question of whether it is really necessary. A tuning aid such as the Min-Etune would be fantastic for a young beginner, yet they are only fitted on high-end guitars. Most people in the market for this kind of instrument will be able to tune a guitar, and would use a (relatively) inexpensive tuner when playing live.

In the old days, if you wanted a Marshall sound, you bought a Marshall amp. If you wanted a choice of sounds, you had to buy several different amps. Nowadays, amp modelling devices can simulate several types of amplifier.

Nowadays, even inexpensive units such as the Vox Stomplab IIG, below, offer amp modelling facilities. This impressive unit demonstrates how accessible guitar technology has become.

From the days of tape echo units and spring reverbs, guitar effects have always been an exciting area of guitar technology. One of the main benefits of an electric guitar over an acoustic instrument is that its sound can be altered electronically. Amateur guitarists can now use digital reverbs and delays that offer sound quality previously only available to professionals.

Most physical effects units now have software counterparts, and guitarists can create complicated software effects rigs on their computers. The image below shows a ‘virtual’ pedalboard, created in Apple’s Logic software:

Guitar synths allow guitarists to create an infinite range of tones. Models such as the Roland GR55, below, produce their own synth sounds.

Fishman’s TriplePlay Wireless MIDI Guitar Controller Pickup transmits midi from the guitar, allowing the player to control any midi-equipped sound source. This video shows what it is capable of:

Guitar synths were once unwieldy and impractical, and very expensive. Nowadays, while not cheap, they are at least within the reach of most guitarists.

It’s not just the instruments and the gear that is progressing. It’s also the way in which we learn the guitar. Guitar lessons are now available online, from internet sites and via Skype. Music can be downloaded instantly, and tuition books can be ordered to arrive the next day. There are many guitar apps, from tuners and metronomes to chord directories, which can be downloaded straight to a phone or tablet.

Considered modern in the fifties and sixties, the electric guitar is now likely to be one of the least technologically advanced items in your recording or live set-up. However, even the electric guitar has been affected by advances in technology. Modern instruments are likely to be better made, more reliable and fitted with better hardware. They are more likely to stay in tune and to be more playable. Mass production has bought prices down, allowing more people to learn the instrument.

Advances in technology have even affected the humble acoustic guitar. Modern strings are more likely to stay in tune, guitars are louder, and the hardware better built. Amplifying an acoustic guitar has never been easier; devices such as the Seymour Duncan soundhole pickup (shown below) and dedicated acoustic guitar amplifiers allow the instrument to be heard in larger venues.

We live in an ever-changing world. So long as innovation continues to benefit musicians and music fans then we are going in the right direction. However, there is always the possibility of technology getting in the way of creativity. If guitarists are more concerned about getting the correct tone from their software rather than from their fingers, then they won’t develop as players.

Money is usually better spent on learning about the guitar rather than on buying more gear. Guitarists should also be careful not to find themselves becoming over-reliant on technology: there will always come a day when the batteries run out or the software crashes.

Many guitarists are still happiest using standard guitars, amps and effects. Part of the appeal of the instrument is its simplicity. However, much guitar technology improves the creative or expressive potential of the guitar, or simply makes the life of a guitarist easier: this we should embrace.