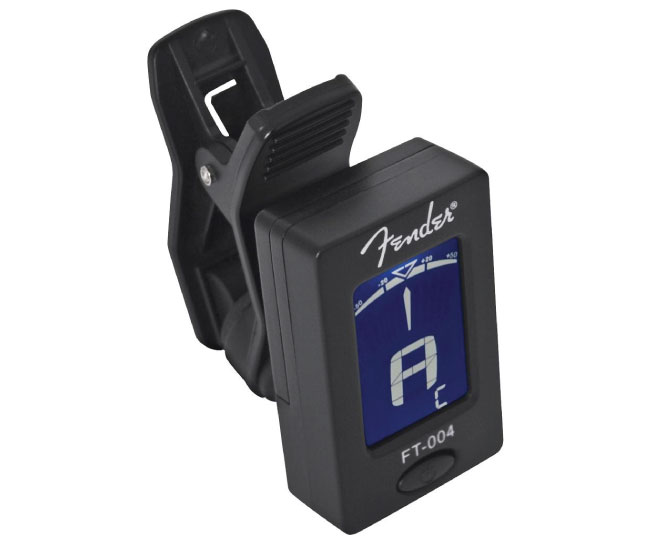 In this Fender FT-004 Tuner Review, we test whether this inexpensive device is worth your hard-earned cash…

The Fender FT-004 is a chromatic tuner that clips on to the headstock of your guitar. It is small (3 x 6 x 3 inches) and light (3.5 ounces). This tuner is cheap to buy; it currently retails at under $10 from Amazon (for UK residents, the pound price is about the same as the dollar price, meaning that it’s more expensive this side of the pond).

The FT-004 is very small: a little wider than the width of a finger. A battery was included with our unit, but we had to install to install it ourselves. This operation required the use of a small phillips head screwdriver.

Once the battery is in place, one press of the unit’s only button turns it on. Further presses cycle through the tuning modes, these being: chromatic, guitar, bass, violin and ukelele.

The unit clips on to the headstock of the guitar. We tested it with electric, acoustic and classical guitars and found the fit to be secure, although with the classical guitar the clasp was open almost as wide as it could be. You could feasibly leave it on while playing, but if you are an energetic performer this may not be a good idea.

Unlike traditional tuners which have inbuilt microphones or jack inputs, the Fender FT-004 detects pitches by sensing the vibrations of the instrument.

For this review we tested the Fender FT-004 in a variety of situations. For solo practice in a small room, the FT-004 worked extremely well. We kept the unit clipped on to the guitar throughout the session. It was nice to simply be able to glance at the headstock to retune, rather than having to lean over, guitar on lap, and operate our tuner single-handedly.

The backlit display was easy to see, and we liked the way that the display turned green when a string was in tune! We have used more sensitive tuners, but the FT-004 performed adequately.

The FT-004 was unaffected by background noise, even when it reached significant levels. For acoustic rehearsals and small gigs, we would feel confident going equipped with just an FT-004. For louder, electric shows, we would prefer having a tuner with a jack input option (this would always be our choice with an electric guitar anyway).

Build quality is as you might expect at this price point. The FT-004 is not badly made, but you wouldn’t want to keep it in a gig bag unprotected. The hinge between the clip and tuner is also a little loose and perhaps a bit fragile. However, if treated well there is no reason to believe that the FT-004 shouldn’t last for a considerable amount of time.

The Fender FT-004 Chromatic Clip Tuner is a neat bit of kit. The build quality is as you would expect for the price. The tuner works well in a variety of situations, and makes a nice change to a traditional microphone tuner. The only drawback is that, being a Gibson man, I now have the Fender logo on my headstock!

Read Reviews Of The FT-004 At Amazon: