A hugely influential composer, guitarist and bandleader, Frank Zappa is an iconic figure whose music continues to inspire musicians all over the world.

This article is an introduction to Zappa’s life and work. We also suggest where a newcomer to Zappa’s music should start…

Frank Zappa was an American guitarist, composer and bandleader. He was also a filmmaker, music producer and he even became briefly involved in politics. His compositions combine elements from many musical styles and he is best known for his inventive, avant-garde-tinged rock output.

Frank Zappa was born on 21 Dec 1940 in Baltimore, MD. He became interested in music at an early age, and began playing the drums when he was twelve. He only took up the guitar in his late teens. Zappa did receive some formal musical education, but was largely self-taught.

Zappa’s early musical influences included rhythm and blues bands of the time. The young Zappa also sought out and listened to music by avant-garde composers such as Stravinsky, Webern and Varèse.

Zappa’s interest in avant-garde music came about after hearing about a record store (Sam Goody) that was so good it could even sell an album by Varèse! His interest piqued, Zappa tracked down a copy of the record in question (The Complete Works Of Edgard Varèse, Vol. 1), which included music for drums and sirens. It was the first album Zappa owned. The second was a recording of ‘The Rite Of Spring’ by Stravinsky.

Zappa is best known both for his solo albums, and for the albums he recorded with his band, The Mothers Of Invention. He also composed many classical compositions, many of which are still performed today.

Zappa formed his first band, The Blackouts (in which he was the drummer), while he was in High School. During this time he also became friends with Captain Beefheart, with whom he would later collaborate.

Zappa found some success writing music and scoring films before joining the band that would later become The Mothers Of Invention. Zappa only started writing songs when he was about twenty years old; before then his output had been orchestral or chamber music.

The Mothers Of Invention & Solo Albums 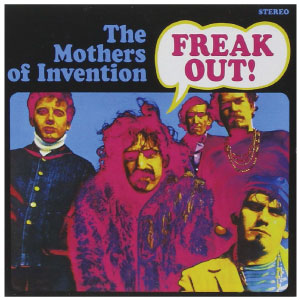 With The Mothers Of Invention, Zappa released some of his greatest works, including albums such as Freak Out (1966), and We’re Only In It For The Money (1968). Zappa disbanded the band in 1969, due to a mixture of financial strain and dissatisfaction with the band.

In 1969 Zappa’s released his first solo ‘rock’ album, ‘Hot Rats’. This was the first of many solo albums which were recorded with a number of different lineups. Zappa also reformed the Mothers with a different line up.

Throughout the 70’s Zappa released records with the reformed Mothers and also many solo albums, including some of his finest works: albums such as Apostrophe, Sheik Yerbouti and Zoot Allures.

Zappa selected highly competent musicians to be in his bands, and toured frequently. His live shows were very popular, and Zappa was a renowned bandleader, known for conducting the band with pre-arranged body movements.

Smoke On The Water

An incident that was to become the stuff of rock folklore took place while The Mothers were on tour in Switzerland. The band’s gear was destroyed by a fire started at the casino they were playing in. Deep Purple were recording in the same complex, and their song ‘Smoke On The Water’ was inspired by visions of the fire.

Zappa’s music contains elements of rock and roll, jazz and modern classical music. Zappa also experimented with electronic sounds and made full use of the recording technology available at the time.

Running throughout Zappa’s music is a strong vein of biting, satirical humor. It’s not particularly subtle, and can turn some people off. However, for many of his fans this is part of the appeal: one minute you’re listening to sophisticated classical music, the next you’re being told a pornographic story accompanied by a doo-wop band.

At the time of Freak Out, Zappa was still writing orchestral music. Zappa’s first solo album was a compilation of classical works entitled Lumpy Gravy, released in 1967.

In 1970 Zappa’s music was performed by the Los Angeles Philharmonic, conducted by Zubin Mehta. Zappa’s classical compositions have since been performed and recorded by many of the world’s greatest orchestras and chamber ensembles.

Frank Zappa’s first electric guitar was a rented Telecaster, which he obtained when he was 21. He later bought a Jazzmaster. After being paid for scoring a film, Zappa bought a Gibson ES-5 Switchmaster, which he used for several years.

Over the course of his career, Zappa played a number of different types of guitar. On stage he was often seen with a Gibson SG.

Zappa’s guitar tone was usually distorted and loud. His improvisation falls somewhere between rock and jazz; but ‘fusion’ is too clean a word to describe Zappa’s dirty tones! His improvisation, unsurprisingly, is inventive and original, combining elements of blues, jazz and avant-garde music.

The best way to discover Zappa’s guitar playing is to listen to his Shut Up And Play Yer Guitar album, which is a collection of guitar solos (see below).

A young, and at the time unknown, Steve Vai sent Zappa a demo tape and a transcription of one Zappa’s songs. Zappa was suitably impressed, and hired Vai to transcribe more of his music. Vai started playing on Zappa’s recordings and then became a member of his touring band.

Zappa was a prolific artist, and his extensive output can be quite daunting for a newcomer. Below is a list of what we consider to the best Frank Zappa albums.

Although lists of this kind are always subjective, if you are new to Frank Zappa, any of the following would be a good place to start.

One of Zappa’s more commercial albums (although ‘commercial’ isn’t really a word that you can use to describe any of his albums). A great collection of rock songs, tinged with jazz and classical sounds – and Zappa’s trademark humor.

Over-nite Sensation also features Tina Turner and the Ikettes on backing vocals: they just happened to be recording in the adjacent studio and were asked in to sing on Zappa’s album.

We’re Only In It For The Money

On one level We’re Only In It For The Money is a none-too subtle pastiche / parody of the flower power generation. However, as with everything FZ this album contains moments of genius, with melodic pop meeting experimental jazz and electronic music.

Zappa’s first non-classical solo album. This inspiring, largely instrumental album was recorded with what was then state of the art equipment and contains some great guitar work.

Sheik Yerbouti is an ideal starting point for discovering Zappa’s music. Although considered a tad commercial for hardcore Zappa fans, on this album the music, humor and production come together perfectly. If you’re easily offended, don’t listen to the lyrics too closely!

Originally a triple album, and now a double CD (or one download – how times change!), Shut Up N’ Play Yer Guitar is a collection of Frank Zappa guitar solos. A must (obviously) for fans of Zappa’s quirky and inventive guitar work.

Frank Zappa’s music continues to inspire and entertain. The amount and quality of his work is testament to the man’s single-mindedness and talent. Sadly Zappa succumbed to illness aged just 53. However, his legacy lives on through his music and through the many musicians he inspired.

If you are new to Zappa’s music check out any of the albums mentioned above. But be warned: this great music is addictive and you might find your record collection growing faster than you had anticipated!