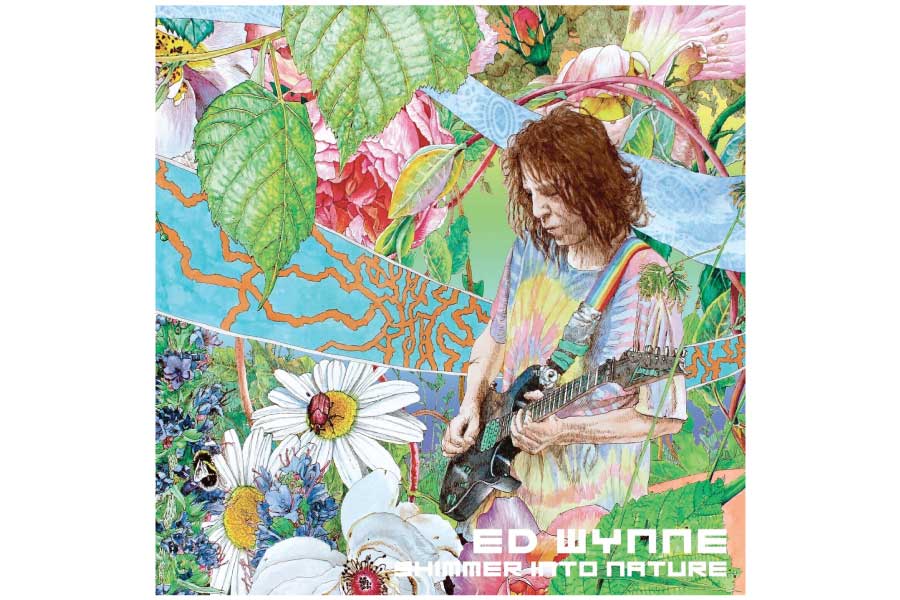 Ed Wynne is the guitarist and leader of English psychedelic rock pioneers Ozric Tentacles. His new solo album, Shimmer Into Nature, was released early in 2019. Read on for our review of the psychedelic-prog master’s first solo album…

Shimmer Into Nature is the first solo album by Ed Wynne, who is best known to most as guitarist and co-founder of English psychedelic rock band Ozric Tentacles.

After forming at the Stonehenge Free Festival in 1983, the Ozric Tentacles, or ‘Ozrics’ to their fans, went on to become stalwarts of the British festival scene, performing in tents and marquees the length and breadth of the British Isles (and further afield).

By the nineties there were few festival-goers who hadn’t heard of the psychedelic English band, named – so the story goes – after an imaginary breakfast cereal.

Perhaps it’s because the Ozric Tentacles don’t fit into the typical ‘rock’ or ‘metal’ categories that Wynne’s playing has been somewhat overlooked by the traditional guitar press.

The guitarist’s trademark use of exotic scales and echo-drenched metal tone, together with tasteful phrasing and expert riffing, fits perfectly with the Ozric’s colorful, ever-shifting instrumental accompaniment.

As band leader and principle composer, Ed Wynne is the one constant in the Ozric’s ever changing line-up. Although the band has released 15 studio albums, together with numerous cassette albums, compilations and live albums, Shimmer Into Nature is the guitarist’s first solo album.

Shimmer Into Nature begins with an ambient introduction featuring constantly-shifting soundscapes. The track soon bursts into life with drums and a funky bassline, with Wynne demonstrating his solid riffing abilities. Listening with headphones is essential to appreciate the sound world Wynne has created; even the guitars move freely around the sonic field.

The introduction to “Travel Dust” features ambient wildlife sounds, and both the album’s title and cover imagery by psychedelic artist John Hurford suggest that the natural world was a major influence on its creation.

In keeping with this natural vibe, the album has an organic feel which is present in both the arrangements and production. However, Shimmer Into Nature is more than an unstructured jam session; there’s method to the sonic madness. For example, in “Travel Dust” you’ll find proggy rhythms giving way to reggae beats which in turn become twisting organ riffs, with swirling synth textures smoothing the changes.

Although a solo album, Shimmer Into Nature might possibly have benefitted from some outside ears; the tracks could have been slightly more focused, and to our ears the (programmed) drums lack presence and are a little too far back in the mix. (Maybe it’s because we’ve been spoilt by the excellent (real) drum sounds on earlier Ozrics albums.)

However, the album’s ethereal ambient textures make up for this slight shortcoming. Shimmer Into Nature is a constantly-shifting, sonic kaleidoscope. Echo-drenched synths and waves of sound fade in and out of the ether, with Wynne’s distinctive lead guitar soaring over the top.

Wynne’s ambition was to create an album “to transport the listener to a place where the everyday ups and downs of the world dissipate, leaving the mind free to wander through a colourful, omnidirectional  guitar and synth driven musical landscape for a while, landing eventually, hopefully freshly charged, with a smile and a calmer spirit.”, and he’s certainly succeeded.

If you’re an Ozric Tentacles fan, then you’ll know what to expect with Shimmer Into Nature. If you’re new to Wynne’s work, then grab this album, and a pair of decent headphones, and soak up the textures, riffs and solos. (Then check out some of the Ozrics’ awesome back catalogue; recommended albums are listed below!)

Check out Shimmer Into Nature at Amazon

Find out more at KScope