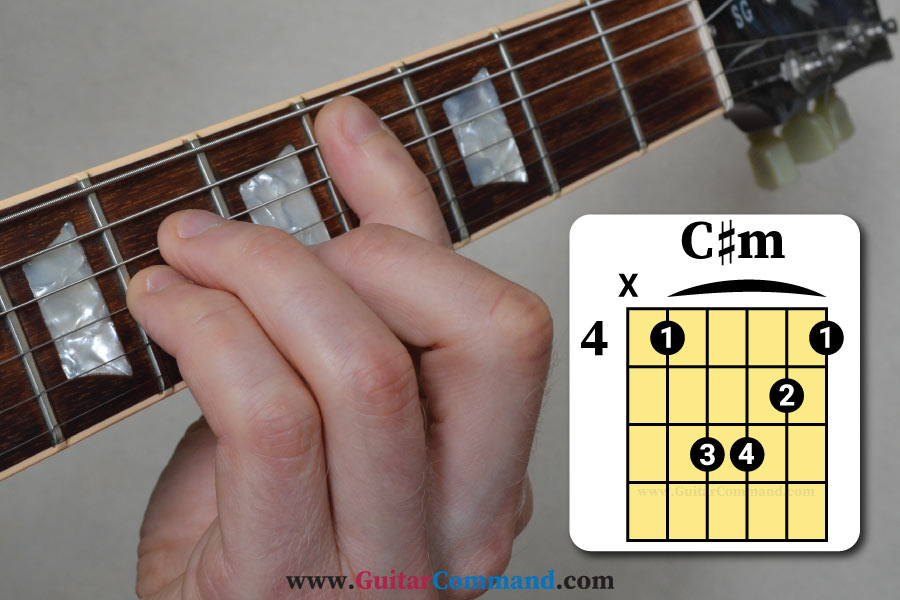 A C# minor guitar chord is usually played as a barre chord. There is a way of playing it as an open chord, but it’s a bit of a “hack”. We’ve included it further down the page as it can be quite useful, particularly for beginners who are still to master bar chords.

The symbol for a C minor chord is C#m, so if you see that symbol written on sheet music, any of the C sharp minor guitar chords on this page can be used.

The diagram below shows the most common way of playing a C# minor guitar chord. It uses the open Am chord shape, but played as a bar chord with the index finger positioned at the 4th fret. 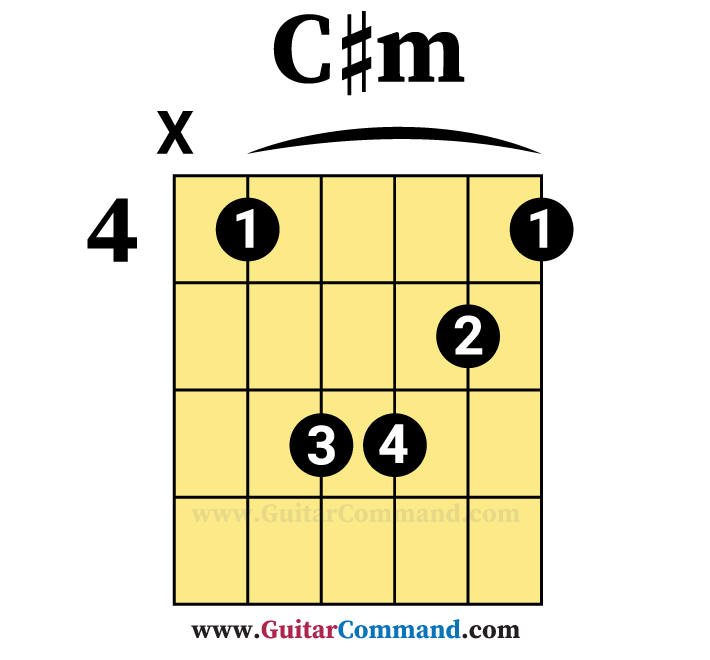 The “X” above the low E string on the chord diagram tells you that the string should not be played, so try to avoid it when you strum the chord.

It won’t sound terrible if you do accidentally play the open string, because the E note is part of a C sharp minor chord. However, in general, chords sound best if the bottom note is the root note (in this case an C sharp).

When you’re learning the chord, try playing each of the notes individually to make sure that the notes are fretted correctly and that your fingers aren’t preventing any of the notes from ringing.

A C sharp minor chord contains three notes: C#, E and G#. In all of the C# minor guitar chords on this page, one or more of these notes is repeated in a different octave in order to give the chord a “bigger” sound (see the C# Minor Guitar Chord Notes section, further down the page).

The diagram below shows a way of playing C sharp minor guitar chord at the 9th fret, which can be useful in some circumstances. 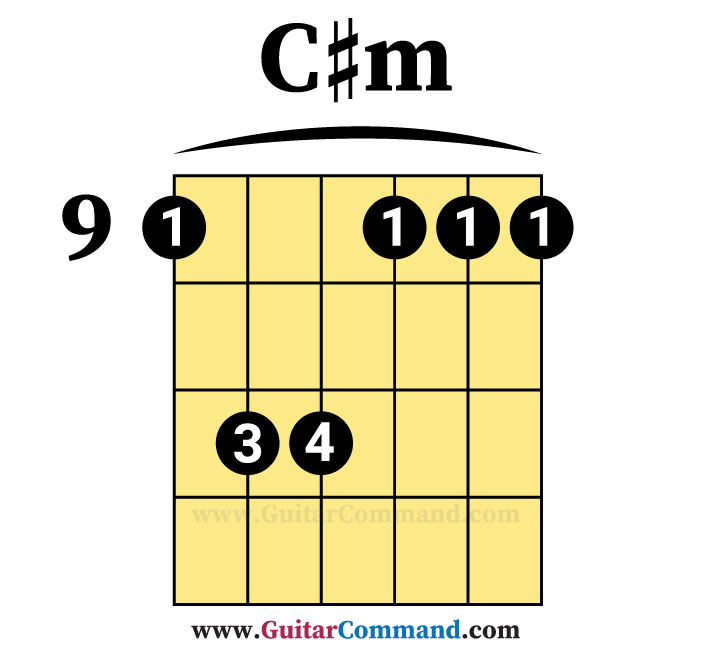 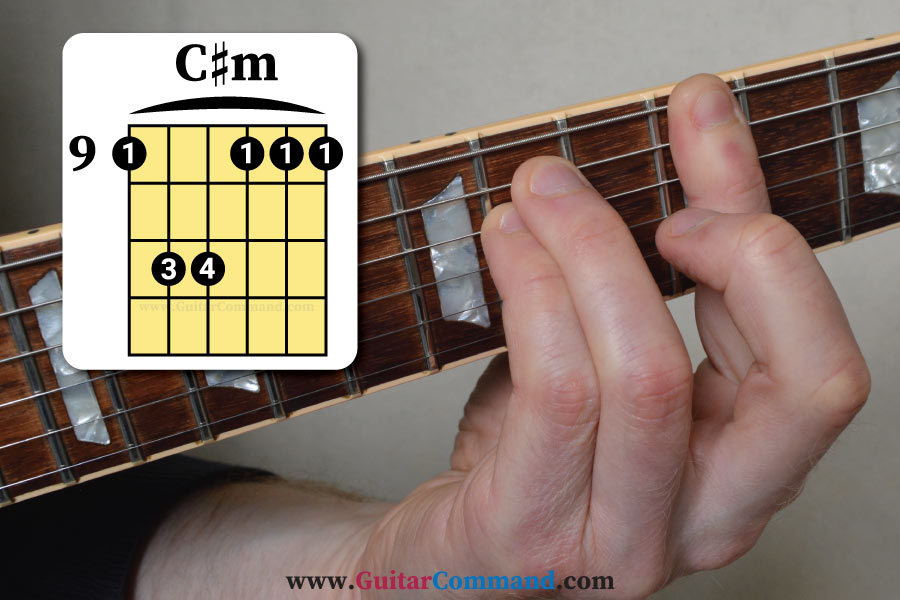 This chord is essentially the standard open E minor chord, but played at the ninth fret with a barre, thereby making it a C# minor chord. In this chord, all six strings are played, so you don’t have to worry about avoiding any strings when strumming. 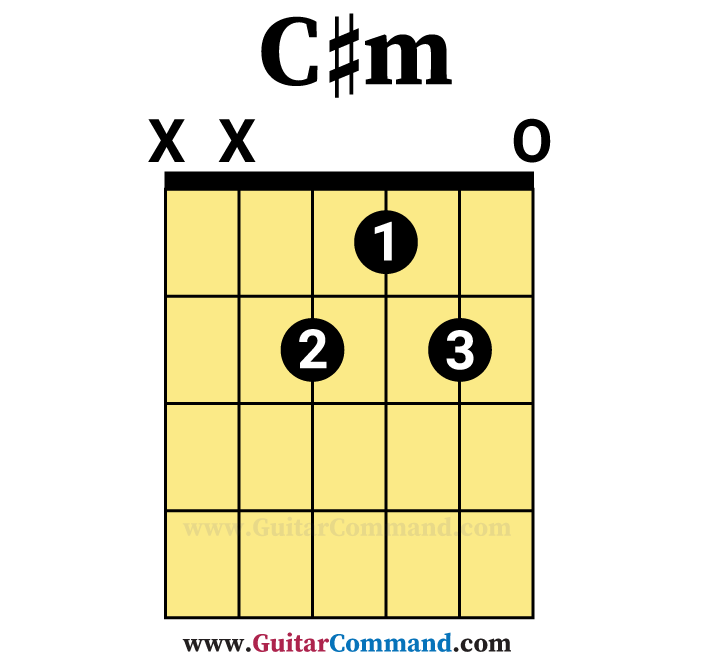 We said at the beginning of the page that this open position version of the C# minor guitar chord is a bit of a hack. Well, it is, and it isn’t…

This chord doesn’t have a C sharp in the bass. This means that, although it is a C sharp minor chord, it’s an inversion. Inverted chords don’t have the root note of the chord as the bass note, giving them (in many circumstances) a weaker sound. (Inverted chords have many uses, but to explain them would be way out of the scope of this page!)

However, the open C# minor guitar chord is fairly easy to play, and is a good choice for beginners who are yet to master open chords.

Just be careful not to accidentally play the bottom two strings. 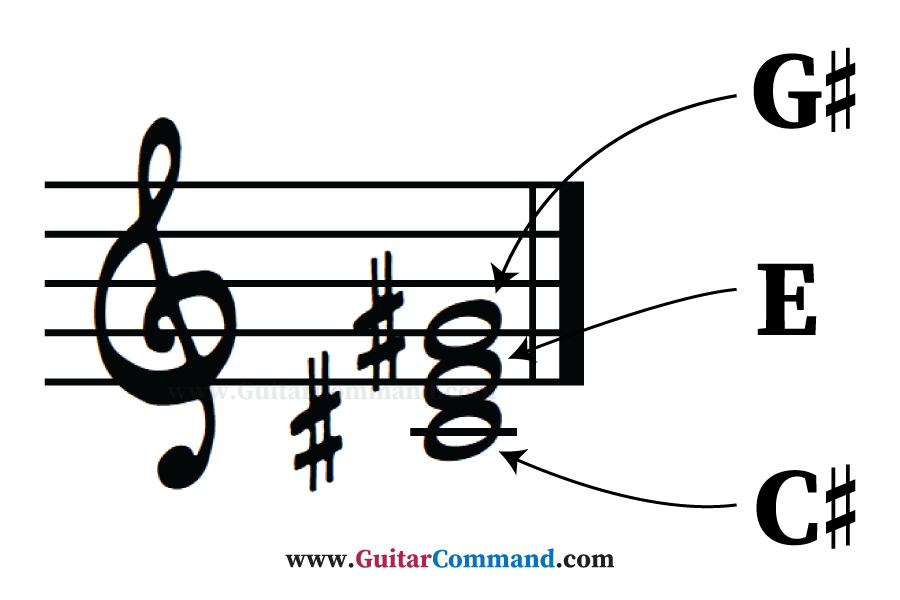 Although you could play a three-note C#m chord on guitar, in most circumstances it probably wouldn’t sound great. Most guitar chords, including those on this page, double up at least one of the notes in a different octave. This gives the chord a much “fuller” sound.

For example, the C# minor guitar chord at the top of this page, shown below with the notes names provided, contains two C# notes and two G# notes; the only note that isn’t repeated is the E. 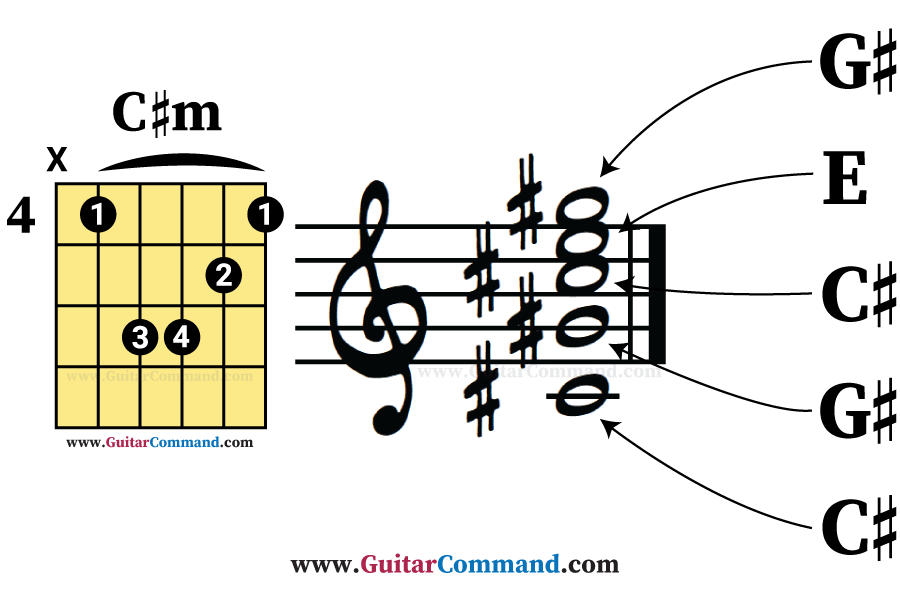 The repeated notes give the chord a more powerful sound.