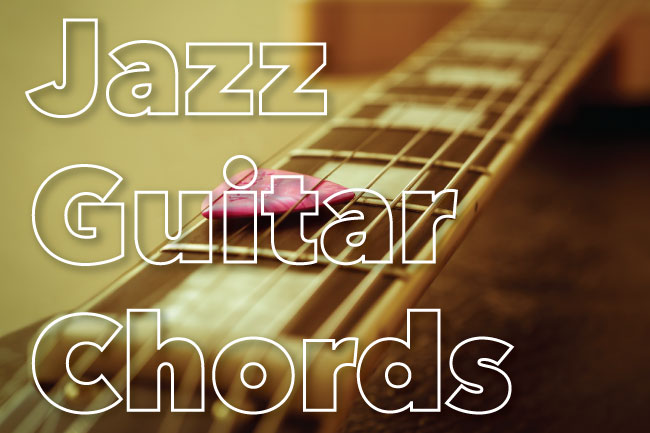 The root notes in each of the following chord shapes are marked with an ‘R’.

See how a master uses chords in solo jazz guitar playing. This is George Van Eps:

As with all guitar chords, there are a number of ways to play major seventh chords. Below are some commonly used shapes for these basic jazz guitar chords:

Minor seventh chords have a cool, jazz-blues sound. They can be played in a number of ways, but the shapes below are often used by jazz guitarists.

Two Five One (ii V I) chord changes lie at the heart of many jazz chord progressions. Use a combination of the chord shapes above to experiment playing a ii V I in C.

Dominant ninth guitar chords contain one more note than dominant seventh chords. This means that ninth chords contain five notes, the extra note being the ninth. In the case of a G9 chord, this would be an A.

You can use 9th chords in place of 7th chords. Try using a G9 instead of the G7 in the ii V I sequence above.

One other chord you will come across is a diminished seventh chord. These chords have a very distinctive sound.

Try substituting the 7th chord in the ii V I above for a diminished 7th chord played a semitone higher (i.e. a G# dim 7th). This will give you a very jazzy sound. Try this trick with any other 7th chords you come across.

If you learn the basic jazz guitar chords on this page, you will be well on the way to being able to play any jazz chord progression. You could also try using these chords in your own music for new sounds and inspiration.