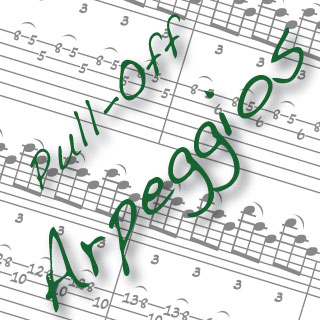 Pull-off triplet arpeggios can be used to play extremely impressive-sounding licks. Usually played on the top two strings of the guitar, pull-off arpeggios require good left-right hand coordination. However, once this simple technique has been mastered, arpeggio shapes can be joined together to create long, virtuosic-sounding lines.

This lesson shows you how to play pull-off triplet arpeggios, with shapes for major and minor arpeggios. At the end of the lesson is an example piece that you can impress your friends with!

• Pull-off triplet arpeggios sound impressive, but the technique is quite simple. The arpeggios are easiest to play on the top two strings, but can be played on other strings.

• For the technique to sound good, the notes must be fluid and smooth. Pull-off arpeggios are effective when played fast, so practice with a metronome and build up your speed.

• In order to play the arpeggio patterns some stretching is involved. Guitarists with big hands may find this technique easier!

• Start by playing the major pattern shown below at the fifth fret. This will produce an F major arpeggio. The music and TAB shows how the notes should be picked. The ‘n’ symbol above a note represents a downstroke, the ‘v’ symbol an upstroke.

• This picking pattern is used for all of the arpeggio shapes on this page. The fourth finger pulls off to the first finger on the 1st string, then the note on the 2nd string is picked.

Once you have got the basic technique, concentrate on the timing and fluidity of your playing. It is important to keep the notes at an even tempo and volume.

Now, using the same picking pattern, try playing F major triplet arpeggios using each of the shapes below. You’ve already played shape one at the fifth fret. Now try shape 2 at the 8th fret and shape 3 at the 13th fret.

Once you’re learned the shapes, try joining them together to create longer licks.

The triplet arpeggio technique can also be used to play minor arpeggios. Use the following shapes to play Am arpeggios. Use shape 1 at the 5th fret, shape 2 at the 8th fret and shape 3 at the 12th fret.

Further Use Of The Triplet Arpeggio Technique

As you’ll find by playing the study below, the major and minor shapes can be combined to create impressive-sounding lead lines. In fact, you can expand the basic technique to include any type of chord, including dominant 7th, sus4 and diminished.

We’ll leave it up to you to find out how to play other types of chord, but, as a hint, the study below includes a Csus4 in the 14th bar, and an E7 in the 16th bar.

We hope that you enjoy experimenting with this technique. You don’t have to use it solely for playing lead lines: it can also be used to create effective riffs. If you have any questions or comments, let us know!

For more information on playing arpeggios in your lead lines, see this page: Lead Guitar Arpeggios.