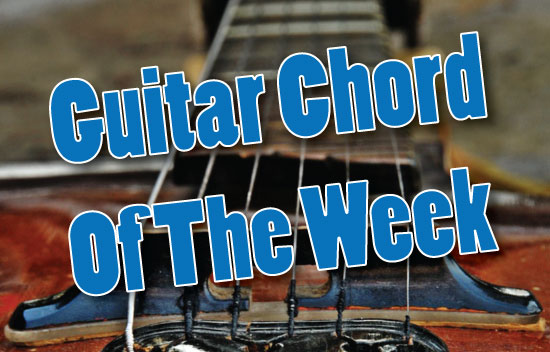 Welcome to another series of Guitar Chord Of The Week.

In this series we are going to explore a wide range of chord shapes, all of which go beyond the basic guitar chords that most guitarists know.

The chords that we are going to look at can be used in a wide range of musical styles, so whether you’re a shredder or a jazzer there will be something here for you.

So, without further ado, let’s introduce this week’s chord…

This is a new take on a standard dominant 7 chord.

This is a movable chord shape. This means that is can be used to play any 7th chord.

The root note of the chord is shown as a blue circle in the diagram. Move this note over the desired root note (i.e. play it at the 5th fret for an A7 chord). Refer to our fretboard diagram if you get stuck.

How To Play This Chord

You may find it a little tricky to play at first. Don’t worry, it’s actually quite a simple way of playing a 7 chord once you get used to it.

• The trick is to mute the 5th string (the A string) with your first (index) finger.

• When you strum the chord, you should also take care not to sound the top E string.

Once you are used to playing a 7th chord like this, try playing the example progression at the end of the article. This will give you an idea of how it sounds, and how it can be used.

Why learn a new dominant 7th shape? I already know how to play 7th chords!

What’s special about this chord is that it doesn’t repeat any notes as octaves. This means that it sounds less ‘full’ than a typical barre 7 chord. It gives you more control over how you play it, making complex funky rhythms much easier to play.

Why Is It A Jazz Chord? It’s Just A Standard 7!

Jazz players like this shape because it is less ‘fussy’ than standard 7th shapes. It contains just the tones that are needed, without any extraneous notes. It can be formed and moved around the fretboard quickly, allowing fast changes.

Dominant 7 chords have the symbols: 7 or 7th.

They can also be symbolised with V7; when this is the case it is assumed that you know what key the music is currently in.

Dominant 7th chords are built from the 5th degree of a major or minor scale. They comprise of a major triad, plus the note a minor 7th interval away from the root note.

If none of this makes sense, don’t worry! Check out our Guitar Chord Theory articles: they’ll help you to become a master of musical theory!

Below is a great-sounding jazz blues progression. Play it slowly at first, and speed up as you get better at changing between the chords.

The progression uses the new jazzy way of playing a 7th chord, and a standard 7 barre chord. The trickiest chord is the lovely B flat 9th chord at the end. You can substitute this with a B flat 7 chord if you prefer.

We hope that you have enjoyed learning about this jazz way of playing a 7th chord. If you did, why not check out some other chords? Don’t forget to subscribe to Guitar Command for more chords, lessons and news.