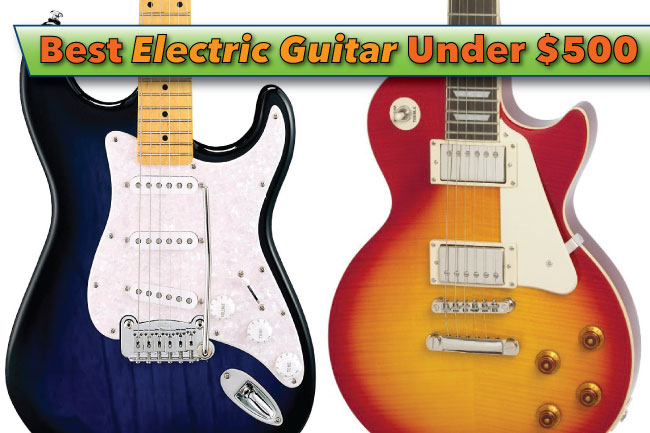 We had a good time picking the best electric guitar under 500 dollars. At this price, things start to get a little interesting. You can get a ‘real’ Fender (as opposed to a Squier), a G&L (guitars we’ve always been keen on), and even a Paul Reed Smith.

Sadly, at under 500 dollars, Gibsons remain out of reach, but the next best thing – in the shape of an Epiphone – is available. In fact the Epiphone Les Paul is one of our top choices at this price.

Leo Fender, who founded G&L with George Fullerton in 1979, said that the company’s instruments were “the best instruments I have ever made.”

And who are we to disagree? Leo Fender was, after all, the man who designed both the Stratocaster and the Telecaster.

The G&L Tribute Legacy is, of course, based on Fender’s own Stratocaster. The Tribute series are built in Korea. This Legacy features Alnico V single coil pickups which are made in Fullerton, California, and G&L’s Dual-Fulcrum vibrato.

One of the best Stratocasters you’ll get for under $500.

As well as producing their own line of guitars, Epiphone (or ‘Epi’ to aficionados) are well-known for their range of ‘affordable’ Gibson models.

The ES-339 is a good-looking electro-acoustic. Smaller in size than the ES-335, it’s a more manageable instrument. It features the standard Gibson twin humbucker set up, with independent volume and tone pots for each pick up and a pick up selector switch. However, the volume pots also have a push/pull coil tap. This means that single coil sounds are at your fingertips, and adds a new level of versatility to the guitar.

Could be the best electro-acoustic guitar under $500.

You probably won’t want this guitar if your aim is to play jazz standards at old folk’s homes. However, if you’re one of the millions of guitarists who were inspired to take up the instrument after listening to Metallica, then this could well be the guitar for you.

Despite this, the look and feel of the instrument is all there. Put it through an amp and you’d be hard-pressed to tell the difference.

Well worth checking out.

Les Pauls are among the most desirable electric guitars, but not everyone has the means to afford one. If you want a piece of the Les Paul action, then the Epiphone Les Paul Standard is the next best thing. The Plustop PRO models feature flame maple veneer tops, and ProBucker humbucker pickups. Like Epiphone’s ES-339, above, the humbuckers can be coil-split to offer single coil sounds.

One of our picks for the best electric guitar under $500.

Among many players, Paul Reed Smith have long been considered the ‘Rolls Royce’ of electric guitars. It is with some trepidation that we look at their sub $500 SE Standard 24 model. How can they retain their usual high quality at this price?

Well, they seem to have pulled it off. The web is full of positive reviews of these Indonesian-made solid mahogany-bodied guitars.

If you fancy something a little different to a Strat, Tele or Les Paul, why not take a chance on the PRS SE Standard 24 and stand out from the crowd?

It’s a funny old world we live in, isn’t it? On this page we’ve got US guitars being made in Korea, Indonesia, and now, with the Fender Modern Player Telecaster, in China.

Of course, it’s all about keeping costs down. Rightly or wrongly manufacturing is far cheaper abroad.

However, it does allow the cash-strapped guitarist (let’s face it there’s a lot of us out there!) to buy a ‘name’ guitar for a bargain price. If you want the US-made version, buy a cheap guitar and when you ‘make it’ you can use your royalty payments!

The Modern Player series is the ‘way in’ to the Fender world for many guitarists. In our view, it’s definitely worth paying the few extra bucks for a Modern Player over a squier. You get the Fender name on the headstock, and a decent, useable instrument that could well be your main instrument for the next twenty years.

Check one out for yourself.

We hope that you’ve enjoyed reading about these guitars, all of which offer excellent value for money. Whether you’re after your first ‘real’ guitar, a reliable back up for gigging, or perhaps you’re a beginner who’s decided not to mess around with cheaper instruments; any of these guitars is worthy of consideration. Best electric guitar under 500 dollars? We’d go for the G&L or the Epi.